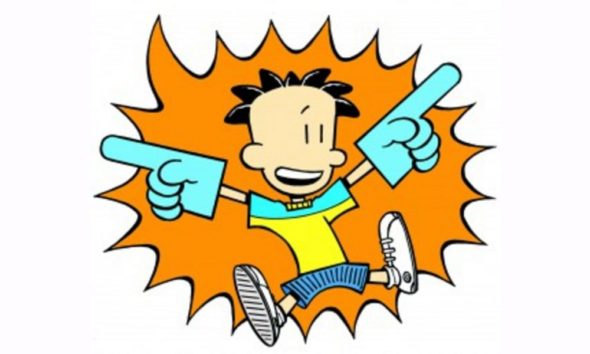 Big Nate is coming to the small screen. Nickelodeon has ordered an animated on the best-selling book, and it has ordered 26 episodes for its first season. The series will follow Nate on his adventures. A cast has not been selected yet.

Nickelodeon revealed more about this series in a press release. Check that out below.

“Nickelodeon is taking the misadventures of Big Nate from page to screen with an all-new animated TV series based on the best-selling children’s books written and drawn by acclaimed author and cartoonist Lincoln Peirce. The eponymous 26-episode series follows Nate, a precocious 11-year-old boy, and his best friends as they navigate sixth grade with humor and style. Big Nate will be produced by Nickelodeon in Burbank, Calif.

“Big Nate is a book title I’ve wanted to translate into a series for a long time, and I am so happy this awesome, super-funny character is coming to Nickelodeon,” said Ramsey Naito, Executive Vice President, Animation Production and Development, Nickelodeon. “All of creator Lincoln Peirce’s slightly unruly, but entirely relatable characters share Nick’s same creative DNA, and we can’t wait for them to join our amazing family!”

The TV series will feature brand-new original storylines centered on Nate and his mischievous shenanigans that usually result in disaster, detention or both. Whether trying to convince everyone that their school is haunted to get out of a test, or accidentally setting the pet iguana free in the school’s air ducts, Nate and his friends cause trouble everywhere–and must keep their cool before they get caught.

“With the greenlight of this show, Nate is getting one step closer to achieving true awesomeness,” said Peirce. “I am thrilled to be collaborating with Nickelodeon on new adventures for this unlikely sixth-grade hero.”

The Big Nate TV series is executive produced by Mitch Watson (All Hail King Julien) and John Cohen (The Angry Birds Movie), with Peirce serving as consultant throughout development and production. Bridget McMeel is co-producer.”

What do you think? Will you watch this animated series?