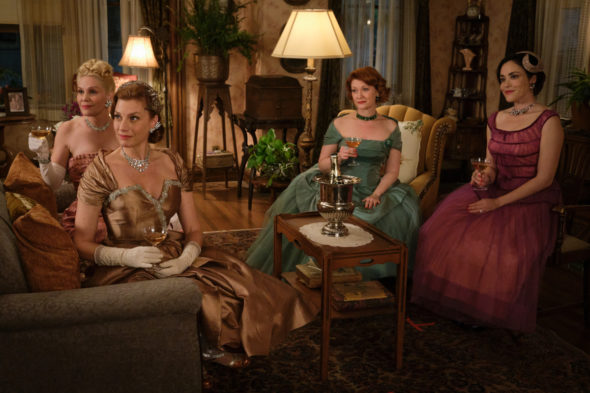 Get ready to explore new stories about ladies and the deaths in their wake. The Why Women Kill TV series has been renewed for a third season by Paramount+. The second season of 10 episodes was released between June and July of this year.

A darkly comedic drama from Marc Cherry, season two of Why Women Kill stars Allison Tolman, Lana Parilla, B.K. Cannon, Jordane Christie, Matthew Daddario, Veronica Falcón, and Nick Frost. The second season’s story takes place in 1949 and explores what it means to be beautiful, the hidden truth behind the facades people present to the world, the effects of being ignored and overlooked by society, and finally, the lengths one woman will go in order to finally belong.

Here’s the renewal announcement from Paramount+:

Dec. 15, 2021 – Paramount+, the streaming service from ViacomCBS, today announced the renewal of its hit original anthology series WHY WOMEN KILL for a third season. Created by Marc Cherry (“Desperate Housewives,” “Devious Maids”), the first two seasons of the dark comedy are currently available to stream exclusively on Paramount+.

“WHY WOMEN KILL explores the intricate lives of its female characters with a style, charm and dark humor only Marc Cherry can provide,” said Nicole Clemens, President, Paramount+ Original Scripted Series. “We’re so excited that the audience for the series continues to grow, with the second season of WHY WOMEN KILL ranking within the top 10 series on Paramount+ in terms of both overall engagement and new subscriber acquisition. We can’t wait to share the new cast of riveting, scandalous characters Marc Cherry has created when the series returns for its third season.”

The second season of WHY WOMEN KILL featured an all-star cast, including Allison Tolman, Lana Parrilla, B.K. Cannon, Jordane Christie, Matthew Daddario, Veronica Falcón and Nick Frost. Set in 1949, season two explored what it means to be beautiful, the hidden truth behind the facades people present to the world, the effects of being ignored and overlooked by society, and the lengths one woman will go in order to finally belong.

Paramount+, a direct-to-consumer digital subscription video on-demand and live streaming service from ViacomCBS, combines live sports, breaking news, and a mountain of entertainment. The premium streaming service features an expansive library of original series, hit shows and popular movies across every genre from world-renowned brands and production studios, including BET, CBS, Comedy Central, MTV, Nickelodeon, Paramount Pictures and the Smithsonian Channel. The service is also the streaming home to unmatched sports programming, including every CBS Sports event, from golf to football to basketball and more, plus exclusive streaming rights for major sports properties, including some of the world’s biggest and most popular soccer leagues. Paramount+ also enables subscribers to stream local CBS stations live across the U.S. in addition to the ability to stream ViacomCBS Streaming’s other live channels: CBSN for 24/7 news, CBS Sports HQ for sports news and analysis, and ET Live for entertainment coverage. For more information about Paramount+, please visit www.paramountplus.com and follow @ParamountPlus on social platforms.

About CBS Studios:
CBS Studios is one of the world’s leading suppliers of entertainment programming, with more than 70 series currently in production for broadcast and cable networks, streaming services and other emerging platforms. The Studio’s expansive portfolio spans a diverse slate of commercially successful and critically acclaimed scripted programming, which includes genre-defining franchises such as “NCIS,” “CSI” and the ever-growing “Star Trek” universe, award-winning late night and daytime talk shows, as well as an extensive library of iconic intellectual property. The Studio also develops and produces local language and international content originating outside of the U.S. with series in the U.K., Europe, the Middle East, Australia and Asia.

About Imagine Television Group:
Imagine Television Group is comprised of Imagine Television and Imagine Television Studios. Imagine Television was founded in 1986 by Brian Grazer and Ron Howard and is run by Imagine Television President Samie Kim Falvey. The company’s productions have been honored with 198 Emmy nominations and 30 Golden Globe nominations. In 2018, the company formed Imagine Television Studios to produce and finance a slate of projects that currently includes the series “Genius: Aretha” with Suzan-Lori Parks and starring Cynthia Erivo, “Why Women Kill” for CBS All Access from Marc Cherry; “Swagger” for Apple with Kevin Durant and Reggie Rock Bythewood; “Wu-Tang: An American Saga” for Hulu with The RZA and Alex Tse; and “Langdon” for NBC. Additional prodcutions include Fox’s award-winning series “Empire,” Netflix’s “Arrested Development,” NatGeo’s Emmy(R)-winning Genius anthology series, Fox’s Golden Globe- and Emmy(R)-winning Best Drama Series “24”; Fox’s “Filthy Rich,” NBC’s Peabody Award-winning series “Friday Night Lights”; Fox’s Emmy(R)-winning Best Comedy “Arrested Development”; Fox’s “Shots Fired” and “Lie To Me”; WB’s “Felicity”; ABC’s “SportsNight”; and HBO’s “From the Earth to the Moon,” which won the Emmy(R) for Outstanding Mini-Series. Howard and Grazer began their collaboration in 1985 with the hit film comedies “Night Shift” and “Splash,” and continue to run Imagine as executive chairmen.

Check out our status sheets to track new TV series pickups, renewals, and cancellations. You can find lists of cancelled shows here.
What do you think? Did you enjoy the second season of the Why Women Kill TV show on the Paramount+ streaming service? Are you looking forward to season three?

So well done! The only show I look forward to watching

BEST SERIES EVER! After I saw a few episodes for free, you bet I got the channel. Best investment of the year. Soooooooo much fun. Decadently devious!