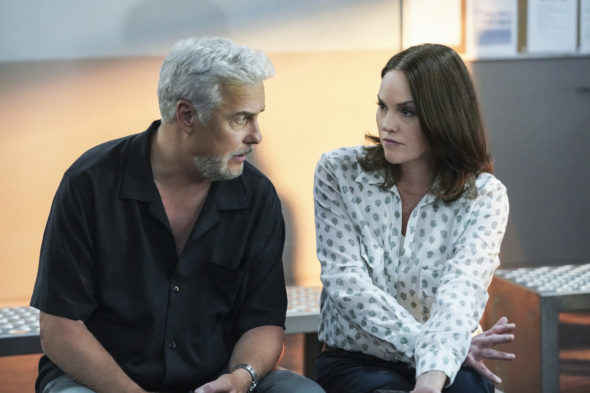 The team from Sin City will be back for more in the 2022-23 television season. CBS has renewed CSI: Vegas for a second season. Word is that William Petersen won’t be returning in his on-screen role but he’ll be back as an executive producer. Jorja Fox might be back for year two.

The first season of CSI: Vegas averaged a 0.40 rating in the 18-49 demographic and 3.70 million viewers in the live+same day ratings (including DVR playback through 3:00 AM). While it’s been one of the network’s lowest-rated shows in the traditional ratings, CSI: Vegas saw sizable growth in the live+7 day ratings with averages of a 0.78 in the demo with 6.81 million.

CBS has renewed hit freshman drama CSI: VEGAS for a second season to air during the 2022-2023 broadcast season. The CBS Original series is part of CBS’ highly successful freshman class, which has four of the top five new series this season. The season one finale aired Wednesday, Dec. 8.

“The incredibly talented CSI: VEGAS creative team and cast did a superb job this first season, brilliantly updating and portraying the CSI universe with fresh stories and a new crime lab, proving that after 20 years, the CSI fan base is still hungry for more and ready to embrace a new chapter in this illustrious franchise,” said Amy Reisenbach, Executive Vice President, Current Programs, CBS.

CSI: VEGAS improved its Wednesday night 10:00 PM time slot by +60% in viewers. Through the first nine episodes (as of Dec. 1), CSI: VEGAS added +3.10m viewers (6.81m from 3.71m, +84%) with 7-day playback. This is the highest playback of any new drama on any network. The entire exciting first season of CSI: VEGAS is available to binge on Paramount+.

About Season One of CSI: VEGAS
CSI: VEGAS, the sequel to the Network’s global hit “CSI: Crime Scene Investigation,” opened a brand-new chapter in Las Vegas – the city where it all began. Facing an existential threat that could bring down the entire Crime Lab and release thousands of convicted killers back onto the neon-lit streets of Vegas, a brilliant new team of investigators led by Maxine Roby (Paula Newsome) enlisted the help of old friends, Gil Grissom (William Petersen) and Sara Sidle (Jorja Fox), to investigate a case centered around former colleague David Hodges (Wallace Langham). This combined force deployed the latest forensic techniques to do what they do best – follow the evidence – to preserve and serve justice in Sin City. The first season also starred Matt Lauria, Mandeep Dhillon and Mel Rodriguez.

What do you think? Have you watched the CSI: Vegas TV show on CBS? Are you glad to hear that this sequel series has been renewed for a second season?

I was happy to see this series brought back but saddened to learn that Petersen won’t be returning as Grissom in season 2, but will be an executive producer. As good as the show is it pales in comparison to the original. That cast of actors were incredible.

Happy to have CSI Vegas back. I’m somewhat disappointed that William Petersen won’t be back. Not sure if the new cast can make it interesting enough to capture my attention for a year.

I’m so excited about season 2. Was hoping it would happen.

I was thrilled to see CSI Vegas show up on CBS again!!! Count me in to be watching with bated breath each new episode

Waiting impatiently for season 2. I didn’t miss any of season 1.

I’ve enjoyed the first season but will not watch the new season without William Peterson.

So glad to see this! We just watched the last episode tonight and I wasn’t sure if it was the last one or if it was returning the first of the year. Not surprised William Peterson won’t be back although he’ll be missed. They did a great job using Gil and Sara to jumpstart this new show and I think it will stand on its own now with the new characters.