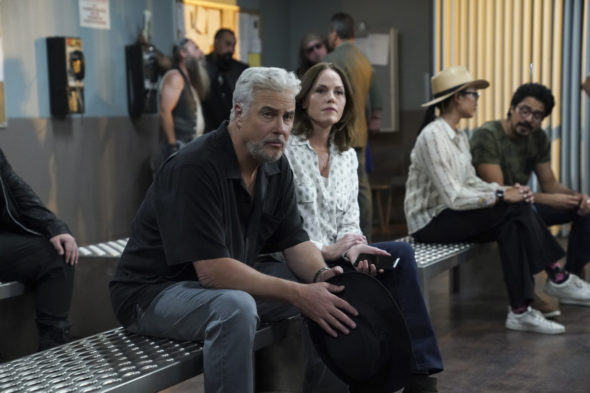 Which friends and foes will return? Has the CSI: Vegas TV show been cancelled or renewed for a second season on CBS? The television vulture is watching all the latest cancellation and renewal news, so this page is the place to track the status of CSI: Vegas, season two. Bookmark it, or subscribe for the latest updates. Remember, the television vulture is watching your shows. Are you?

The first season of CSI: Vegas averages a 0.40 rating in the 18-49 demographic and 3.70 million viewers in the live+same day ratings (including DVR playback through 3:00 AM). While these numbers don’t include further delayed or streaming viewing, they are a very good indicator of how a show is performing, especially when compared to others on the same channel. There can be other economic factors involved in a show’s fate, but typically the higher-rated series are renewed and the lower-rated ones are cancelled. Find out how CSI: Vegas stacks up against other CBS TV shows.

Will CBS cancel or renew CSI: Vegas for season two? The original CSI ran for 15 seasons and was a top-10 show for nine of those seasons. This sequel series certainly isn’t a hit but I think it will still eke out a renewal. I’ll update this page with breaking developments. Subscribe for free alerts on CSI: Vegas cancellation or renewal news.

What do you think? Are you glad that the CSI: Vegas TV show has been renewed for a second season? How would you feel if CBS had cancelled this TV series, instead?

CSI Vegas has been renewed for season 2

Please renewed another season so good enjoy it and love it. Never missed any episodes of it. Look forward every week.

I hope CSI:Vegas is renewed. It’s a great show. It would be very disappointing if it was canceled or not renewed.

I truly hope it will be renewed. I love the show! I was surprised that it came back as a limited series, but guessing that they were just testing the waters. I was surprised about the ratings, though. Doesn’t it count if people were recording the show and watching afterwards? Maybe an earlier showing or perhaps a different night would remedy that. I love the whole cast, and it would be awesome if Marg Helgenberger were to return!

I was so excited for the return of CSI, only to be disappointed by the casting and acting of this new crew. There is no magic with this new cast. They just don’t gel. None of the new team are anchors like Catherine was. The ME is boring. There’s no quirky lab guy or girl. It’s just plain flat, and in my opinion, the only reason anyone is tuning in is to see Gil and Sara, and sadly, their relationship is so cold and robotic, it’s not even worth tuning in for that

Grissom and Sara brought that something unique, tantalizing and undefinabl to the show. GSR is not set out to be our typical TV show pairing. We’d not only need to catch but also know when and where to look for that certain and fleeting looks and gestures shared by the two marvelous characters.

I loved them before and love them even more now. I have to say that Grissom, Sara and Maxcine made the ten Vegas episodes enjoyable.

Yes, it deserves a second season and better time slot, too.

I love this show. Please don’t cancel it. I love William Petersen and Jorja Fox. I don’t care for Paula Newsome. Please give this show a chance.

Please give the show a chance, give it a second season.

Regarding Telly’s Take comment that the sequel isn’t a hit – give the show a chance to develop. People are so impatient these days. I like series that take you on a journey as they progress. So far I’m enjoying the progression of the show and look forward to each week. The cast, new and old, is mostly good.

I like the show but not nearly as much as CSI Miami. We’ll see if it grows on me. I wish that Matt Lauria would play his character less robotically. When he’s on the screen I cringe. His character appears to be emotional less. That turns me off to the scene. Can’t imagine why any director would think this portrayal would endear us to the character.

I so happy to see return your favorite and the characters from original & the new one. I want renewed picked up for second season on CSI: Vegas. I can’t wait to continue watching. We have new executive producer Monica Macer with replaced by Carol Mendelsohn and new main characters Jamie Gray Hyder. I hope your watching.

I am happy to see the return of this favorite and the current characters from the original & the new ones. I look forward to seeing which originals will possibly visit or return . Can’t wait to continue watching. Always watched as a family when the kids were young, will still enjoy watching wth my husband.