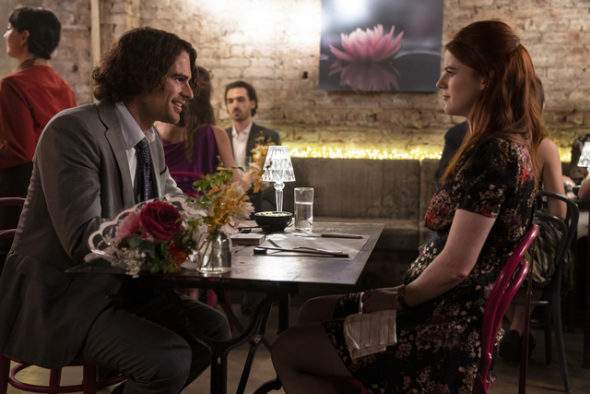 Can this tale have a happy ending? Has The Time Traveler’s Wife TV show been cancelled or renewed for a second season on HBO? The television vulture is watching all the latest cancellation and renewal news, so this page is the place to track the status of The Time Traveler’s Wife, season two. Bookmark it, or subscribe for the latest updates. Remember, the television vulture is watching your shows. Are you?

Airing on the HBO cable channel, The Time Traveler’s Wife stars Rose Leslie, Theo James, Desmin Borges, and Natasha Lopez. The story follows the out-of-order love story between Clare Abshire (Leslie), and Henry DeTamble (James). They have a marriage with a significant problem — time travel. At six years old, Clare meets Henry, the future love of her life. Unbeknownst to her, he’s a time traveler who is actually visiting from the future. Some 14 years later, a beautiful redhead wanders into the library where Henry works. She claims to have known him all her life and to also be his future wife. From there, a magical romance ensues that is as sprawling and complicated as Henry’s attempts to explain his “condition”.

The first season of The Time Traveler’s Wife averaged a 0.03 rating in the 18-49 demographic and 223,000 viewers in the live+same day ratings (including DVR playback through 3:00 AM). While these numbers don’t include further delayed or streaming viewing, they are a very good indicator of how a show is performing, especially when compared to others on the same channel. There can be other economic factors involved in a show’s fate, but typically the higher-rated series are renewed and the lower-rated ones are cancelled. Find out how The Time Traveler’s Wife stacks up against other HBO TV shows.

What do you think? Have you been watching The Time Traveler’s Wife TV show on HBO? Would you watch a second season or, should this series finish in one season?

This is absolutely not a ‘closed ended series’. The finale clearly sets up season two, and probably season three as well.

I really liked it. I think there should be a second season so we can find out more of there story. There has to be more episodes. I really do not understand why people give it such poor reviews. The acting is wonderful. The story is a love story with a very difficult twist but they do pull it off with grace

This can’t be a close ended six episodes, as the end of season 1 we have only gone through the first part of the book! Please HBO… give us the rest of the story!