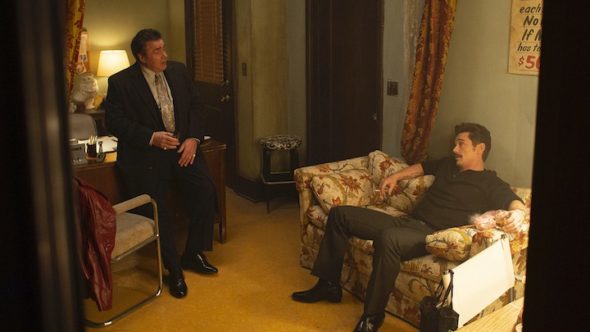 Do the Martino twins have a future? Is The Deuce TV show cancelled or renewed for a fourth season on HBO? The television vulture is watching all the latest cancellation and renewal news, so this page is the place to track the status of The Deuce season four. Bookmark it, or subscribe for the latest updates. Remember, the television vulture is watching your shows. Are you?

An HBO period piece, The Deuce stars James Franco, Maggie Gyllenhaal, Margarita Levieva, Emily Meade, Lawrence Gilliard, Jr., Luke Kirby, Chris Bauer, Chris Coy, Michael Rispoli, David Krumholtz, Daniel Sauli, Olivia Luccardi, and Sepideh Moafi. A fictional historical drama, inspired by real-life twins who would go on to operate business fronts for the Gambino family, The Deuce centers on the 1970s rise of modern-day pornography in New York City. Season three picks in 1985. With HIV on the rise, it is the end of an era, as VHS becomes the hot medium for pornography.

The third season of The Deuce averaged a 0.07 rating in the 18-49 demographic and 286,000 viewers. Compared to season two, that’s down by 49% and 46%, respectively. Learn how The Deuce stacks up against the other HBO TV shows.

Since this is the final chapter, we don’t have to wonder whether The Deuce will be cancelled or renewed for a fourth season. Even as I finalize my dinner plans, I’ll still keep an eye on the Nielsens and update this page with any developments. Subscribe for free updates on The Deuce.

What do you think? Is The Deuce TV on HBO ending at the right time? If it were up to you, would it be cancelled or renewed for season four?