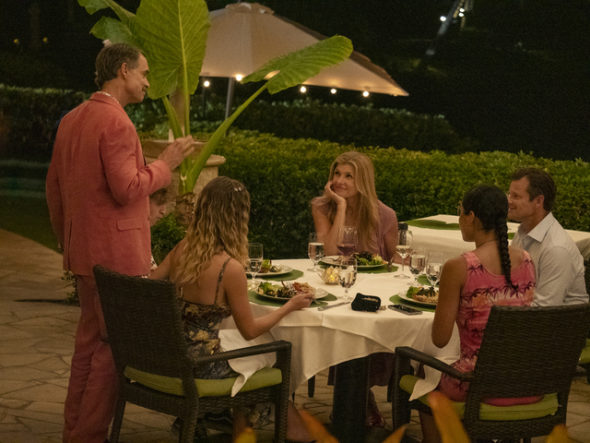 Can this resort get legitimately good reviews? Has The White Lotus TV show been cancelled or renewed for a second season on HBO? The television vulture is watching all the latest cancellation and renewal news, so this page is the place to track the status of The White Lotus. Bookmark it, or subscribe for the latest updates. Remember, the television vulture is watching your shows. Are you?

Airing on the HBO cable channel, The White Lotus stars Murray Bartlett, Connie Britton, Jennifer Coolidge, Alexandra Daddario, Fred Hechinger, Jake Lacy, Brittany O’Grady, Natasha Rothwell, Sydney Sweeney, and Steve Zahn with Molly Shannon, Jon Gries, Jolene Purdy, Kekoa Kekumano, and Lukas Gage in recurring roles. The comedy’s story follows the vacations of various hotel guests over the span of a week as they relax and rejuvenate in paradise, at The White Lotus resort. But with each passing day, a darker complexity emerges in these picture-perfect travelers, the hotel’s cheerful employees, and the idyllic locale itself.

The first season of The White Lotus averaged a 0.11 rating in the 18-49 demographic and 544,000 viewers in the live+same day ratings (including DVR playback through 3:00 AM). While these numbers don’t include further delayed or streaming viewing, they are a very good indicator of how a show is performing, especially when compared to others on the same channel. Find out how The White Lotus stacks up against other HBO TV shows.

Will HBO cancel or renew The White Lotus for season two? It seems clear that this is a close-ended mini-series so a second season renewal isn’t expected. However, these days, things can change. I’ll update this page with breaking developments. Subscribe for free alerts on The White Lotus cancellation or renewal news.

8/11/21 update: The White Lotus has been renewed for a second season on HBO.

What do you think? Are you glad that The White Lotus TV show has been renewed for a second season? How would feel if this HBO series had ended instead?