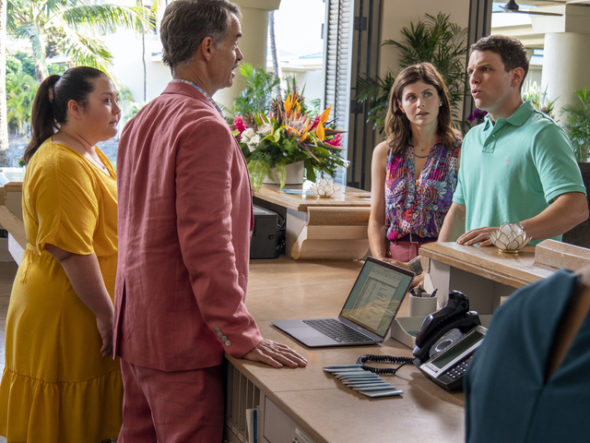 HBO will be bringing viewers back to The White Lotus. The cable channel has ordered a second season of the satirical comedy series which will feature a new locale and new characters.

The first season of The White Lotus stars Murray Bartlett, Connie Britton, Jennifer Coolidge, Alexandra Daddario, Fred Hechinger, Jake Lacy, Brittany O’Grady, Natasha Rothwell, Sydney Sweeney, and Steve Zahn with Molly Shannon, Jon Gries, Jolene Purdy, Kekoa Kekumano, and Lukas Gage in recurring roles. The story follows the vacations of various hotel guests over the span of a week as they relax and rejuvenate in paradise, at The White Lotus resort. But with each passing day, a darker complexity emerges in these picture-perfect travelers, the hotel’s cheerful employees, and the idyllic locale itself.

Airing on Sunday nights, the first season of The White Lotus averages a 0.10 rating in the 18-49 demographic and 468,000 viewers in the live+same day ratings (including DVR playback through 3:00 AM). While these numbers don’t include further delayed or streaming viewing, they are a very good indicator of how a show is performing, especially when compared to others on the same channel. This show is a middle-of-the-road performer in the traditional numbers. The finale airs this Sunday.

Next Chapter Will Feature New Characters And Locale

With the finale episode debuting this Sunday, THE WHITE LOTUS is a social satire set at an exclusive Hawaiian resort and follows the vacations of various hotel guests over the span of a week as they relax and rejuvenate in paradise. But with each passing day, a darker complexity emerges in these picture-perfect travelers, the hotel’s cheerful employees and the idyllic locale itself. Episodes are available to stream on HBO Max.

The next chapter of THE WHITE LOTUS leaves Hawaii behind and follows a different group of vacationers as they jet to another White Lotus property and settle in temporarily amongst its inhabitants.

Currently ranking #1 among all series on HBO Max, THE WHITE LOTUS has achieved consistent week over week growth for both premiere and digital audience, leading into the finale episode.

A hit with fans and critics alike, The New Yorker claimed, “Mike White’s tragicomedy is one of the best shows of the year,” while Time called it “the must-see show of the summer” and IndieWire praised it as “nothing short of a marvel.”

Francesca Orsi, Executive Vice President, HBO Programming quote: “Mike has once again delivered a quintessential HBO show, and it’s the talk of the town. We were thrilled to hear where he wanted to go next, after closing this epic chapter in Hawaii, and can’t wait to keep following him wherever he takes us.”

Check out our status sheets to track new TV series pickups, renewals, and cancellations. You can find lists of cancelled shows here.
What do you think? Did you enjoy the first season of The White Lotus TV show? Will you be watching the second season on HBO?

Loved the White Lotus series, A lot of humor, a little bit shocking in places, and a little intrigue. Can’t wait for season 2.

Loved The White Lotus!! Fresh and original, with superb acting, incredible writing, mesmerizing photography and THAT Music is addicting!! Can hardly wait for season two!