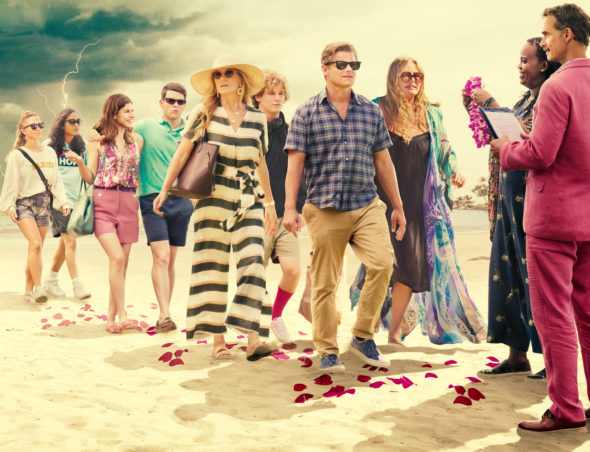 The story follows the vacations of various hotel guests over the span of a week as they relax and rejuvenate in paradise, at The White Lotus resort. But with each passing day, a darker complexity emerges in these picture-perfect travelers, the hotel’s cheerful employees, and the idyllic locale itself.

Among the employees at The White Lotus are the fastidious resort manager Armond (Bartlett), who, after a sudden trauma, begins a dramatic downward spiral – and the down-to-earth spa manager, Belinda (Rothwell) who gets taken on an emotional roller coaster ride by a needy guest.

The vacationers include the Mossbacher family – Nicole (Britton), a successful type-A exec, who can’t help but treat her family like disobedient employees; her husband, Mark (Zahn), dealing with both an embarrassing health crisis and a terminal inferiority complex; their teenaged son, Quinn (Hechinger), a socially awkward gamer, experiencing the wonder of nature for the very first time; their daughter, Olivia (Sweeney), and her friend, Paula (O’Grady), sharp-tongued college sophomores who cast a sardonic eye on the lifestyles and belief systems of everyone around them.

The handsome, entitled Shane Patton (Lacy) is here with his beautiful bride, Rachel (Daddario). Shane and Rachel are in the throes of young love, but as they get to know each other better in this new, intimate environment, clouds of doubt appear. By the time Shane’s intrusive mother, Kitty (Shannon), surprises them with an unwelcome visit their fairytale honeymoon has begun to unravel.

And finally, there’s Tanya McQuoid (Coolidge), a wealthy, unstable woman, recovering from the death of her mother. Tanya’s traveling alone to the hotel, looking for love and in desperate need of a massage.

Series Finale:
Episode #6 — Departures
Rachel (Alexandra Daddario) shares some harsh truths with Shane (Jake Lacy) and confides in Belinda (Natasha Rothwell), who’s reeling from bad news of her own. As the Mossbachers turn the page on their harrowing scare, Quinn (Fred Hechinger) reveals major life plans. With nothing left to lose, Armond (Murray Bartlett) goes on an all-out bender – and exacts the ultimate revenge on his nemesis.
First aired: August 15, 2021.

What do you think? Do you like The White Lotus TV show? Do you think it should be renewed for a second season?