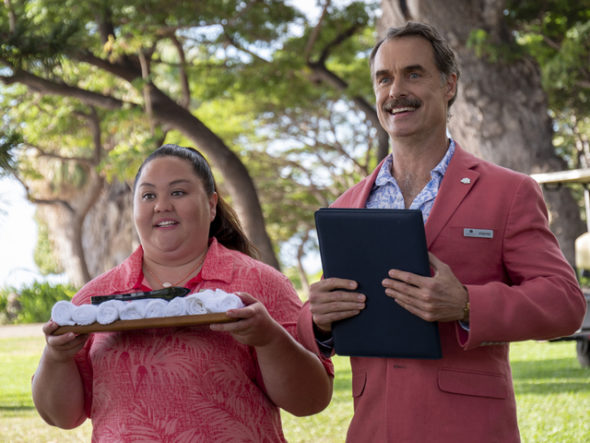 It seems like this The White Lotus TV show is a close-ended mini-series so, a second season renewal isn’t expected. Still, if a series is popular enough, things can change. Is there a future for this HBO show beyond its six episodes? Stay tuned.  *Status Update Below.

A satirical comedy series, The White Lotus stars Murray Bartlett, Connie Britton, Jennifer Coolidge, Alexandra Daddario, Fred Hechinger, Jake Lacy, Brittany O’Grady, Natasha Rothwell, Sydney Sweeney, and Steve Zahn with Molly Shannon, Jon Gries, Jolene Purdy, Kekoa Kekumano, and Lukas Gage in recurring roles. The story follows the vacations of various hotel guests over the span of a week as they relax and rejuvenate in paradise, at The White Lotus resort. But with each passing day, a darker complexity emerges in these picture-perfect travelers, the hotel’s cheerful employees and the idyllic locale itself.

What do you think? Do you like The White Lotus TV series on HBO? Should it be renewed for a second season, potentially with a new cast?

*8/11/21 update: The White Lotus has been renewed for a second season on HBO.

This may be HBO, but even the flagship of cable can err. Lackluster judgement approving this elephant, very lackluster written script, and frankly cliche ridden. Painful to watch at times with contrived/gratuitous sex scenes and references. Sophomoric is not to strong of a charge, and I’m not a prude….a steadfast HBO subscriber here.
Oh, but the scenery is pleasant at the Four Seasons Hawaii.