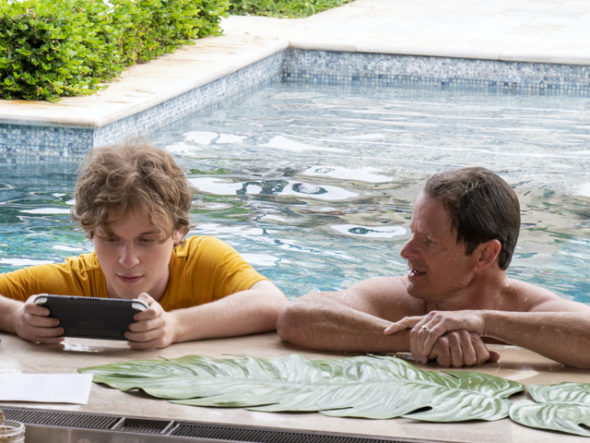 What will happen to the guests in the first season of The White Lotus TV show on HBO? As we all know, the Nielsen ratings typically play a big role in determining whether a TV show like The White Lotus is cancelled or renewed for season two (in this case, the show appears to be a true mini-series). Unfortunately, most of us do not live in Nielsen households. Because many viewers feel frustrated when their viewing habits and opinions aren’t considered, we invite you to rate all of the first season episodes of The White Lotus here.  *Status Update Below.

An HBO satirical comedy series, The White Lotus stars Murray Bartlett, Connie Britton, Jennifer Coolidge, Alexandra Daddario, Fred Hechinger, Jake Lacy, Brittany O’Grady, Natasha Rothwell, Sydney Sweeney, and Steve Zahn with Molly Shannon, Jon Gries, Jolene Purdy, Kekoa Kekumano, and Lukas Gage in recurring roles. The story follows the vacations of various hotel guests over the span of a week as they relax and rejuvenate in paradise, at The White Lotus resort. But with each passing day, a darker complexity emerges in these picture-perfect travelers, the hotel’s cheerful employees and the idyllic locale itself.

What do you think? Which season one episodes of The White Lotus TV series do you rate as wonderful, terrible, or somewhere between? Do you think that The White Lotus should be renewed for a second season on HBO? Don’t forget to vote, and share your thoughts, below.

*8/11/21 update: The White Lotus has been renewed for a second season on HBO.

I love this show even down to the haunting and catchy theme tune! The characters are convincingly drawn and diverse, although the air of rich privilege is suffocating and infuriating at times. However, this feeling intensifies comprehension of certain characters’ frustration at their situation. I really hope there will be further seasons of this fascinating study into class differences set in luxurious surroundings. I witnessed the same situation when I lived in Gambia in West Africa for several months, years ago. Exactly the same luxury hotels and ‘cultural’ entertainment. A social filter for those who are nervous about embracing the… Read more »

Wish I could get back the time I wasted on watching this.

I love this série so hope for a second season you can’t keep us hanging like this, thanks beautiful series.