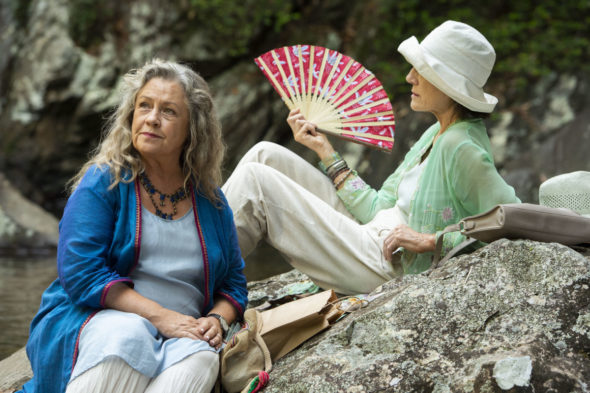 Are the members of this family more alike than they realize? Has The End TV show been cancelled or renewed for a second season on Showtime? The television vulture is watching all the latest cancellation and renewal news, so this page is the place to track the status of The End, season two. Bookmark it, or subscribe for the latest updates. Remember, the television vulture is watching your shows. Are you?

An Australian series that airs on the Showtime cable channel in the United States, The End TV show stars Harriet Walter, Frances O’Connor, Noni Hazlehurst, Roy Billing, Robyn Nevin, Luke Arnold, Morgan Davies, Ingrid Torelli, John Waters, Brendan Cowell, and Alex Dimitriades. The story follows three generations of a family as they live with separate but intersecting obsessions — trying to figure out how to die with dignity, live with none, and make it all count. Dr. Kate Brennan (O’Connor) is an Australian-based specialist in palliative care. Euthanasia is a hot-button topic in Kate’s field of work, and she is passionate in her opposition to it. On the other side of the world, Kate’s mother, Edie Henley (Walter), feels just as strongly about her right to die. Kate has little choice but to ship Edie out from England and deposit her in Australia’s Gold Coast in a nearby retirement community and that’s Edie’s worst nightmare. While Kate struggles with her own problems, her children — one of whom is a teenage trans boy — are trying to work out who they are and who they want to be.

Will Showtime cancel or renew The End for season two? This show originates in Australia and there’s been no word on a second season renewal yet. The show’s creator, Samantha Strauss, has said that she would love to make multiple seasons. It’s unclear if the show has been successful in other markets so, for now, we’ll have to wait and see. I’ll update this page with breaking developments. Subscribe for free alerts on The End cancellation or renewal news.

What do you think? Do you hope that The End TV show will be renewed for a second season? How would you feel if this TV series was cancelled, instead?

Please do not cancel The End, by far the best series on cable. Stop canceling good shows for crap shows.
Thank you

Please, please I hope thre will be a season 2 or 3. My husband and I both love this show!

Season 2! This is a fantastic show & topic that needs to be addressed globally.