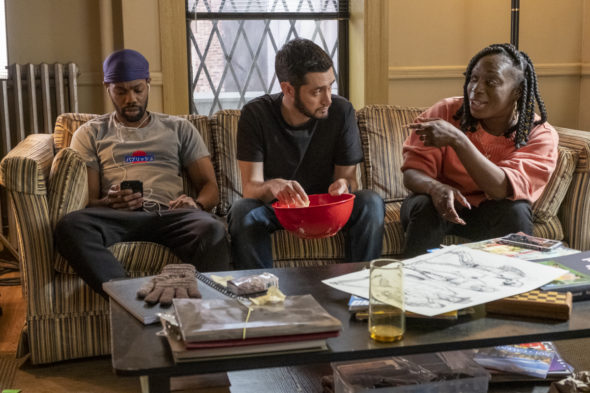 Can this pair of friends thrive in their new home? Has the Flatbush Misdemeanors TV show been cancelled or renewed for a second season on Showtime? The television vulture is watching all the latest cancellation and renewal news, so this page is the place to track the status of Flatbush Misdemeanors, season two. Bookmark it, or subscribe for the latest updates. Remember, the television vulture is watching your shows. Are you?

Airing on the Showtime cable channel, the Flatbush Misdemeanors TV series was created and written by its stars, Kevin Iso and Dan Perlman. Others in the cast include Hassan Johnson, Kareem Green, and Kristin Dodson. The show is a raw comedy about city life and follows Dan (Perlman) and Kevin (Iso) as they struggle to thrive in their new surroundings in Flatbush, Brooklyn in New York City. The story explores two long-time friends seeking to climb out of their heads and connect with others. One such person is Zayna (Dodson), one of Dan’s outspoken high school students.

Will Showtime cancel or renew Flatbush Misdemeanors for season two? My sense is that, though the viewership for this series is low, it isn’t very expensive to produce. I’m leaning toward a renewal. I’ll update this page with breaking developments. Subscribe for free alerts on Flatbush Misdemeanors cancellation or renewal news.

8/25/21 update: Flatbush Misdemeanors has been renewed for a second season on Showtime.

What do you think? Are you glad that the Flatbush Misdemeanors TV show has been renewed for a second season? How would you feel if Showtime had cancelled this TV series, instead?

I hope it gets renewed this show is funny