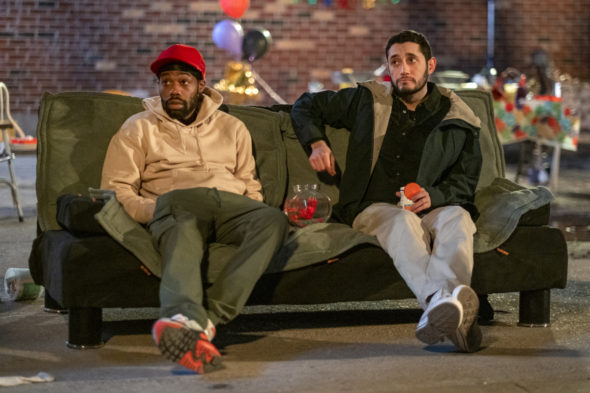 TV show description:
A single-camera comedy series, the Flatbush Misdemeanors TV series was created and written by its stars, Kevin Iso and Dan Perlman. The program is based on a series of award-winning shorts by the duo.
The show is a raw comedy about city life and follows Dan (Perlman) and Kevin (Iso) as they struggle to thrive in their new surroundings in Flatbush, Brooklyn in New York City. The story explores two long-time friends seeking to climb out of their heads and connect with others. One such person is Zayna (Dodson), one of Dan’s outspoken high school students.

Series Finale:
Episode #20 — Memento Mori
Drew is determined to settle the score with Dan now that he knows the truth; Kevin finds out his fate with the art fellowship; Zayna’s world is upended when her dad is unexpectedly released from prison.
First aired: August 21, 2022.

What do you think? Do you like the Flatbush Misdemeanors TV show? Do you think it should have been cancelled or renewed for a third season?