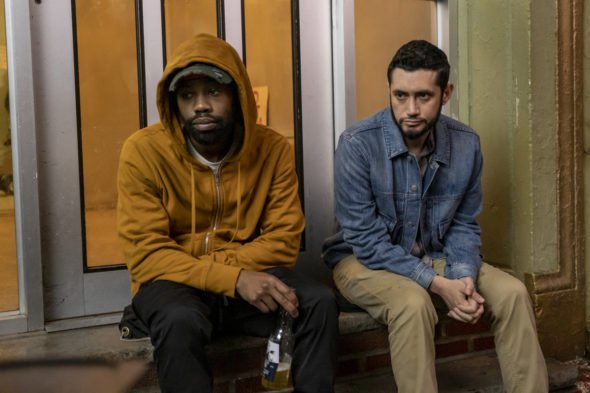 There are more stories to tell in Brooklyn. Showtime has renewed the Flatbush Misdemeanors TV show for a second season.

A single-camera comedy series, the Flatbush Misdemeanors TV series was created and written by its stars, Kevin Iso and Dan Perlman. Others in the cast include Hassan Johnson, Kareem Green, and Kristin Dodson. The show is a raw comedy about city life and follows Dan (Perlman) and Kevin (Iso) as they struggle to thrive in their new surroundings in Flatbush, Brooklyn in New York City. The story explores two long-time friends seeking to climb out of their heads and connect with others. One such person is Zayna (Dodson), one of Dan’s outspoken high school students.

Airing on Sunday nights, the first season of Flatbush Misdemeanors averaged a 0.02 rating in the 18-49 demographic and 69,000 viewers in the live+same day ratings (includes all DVR playback through 3:00 AM).

LOS ANGELES – August 24, 2021 – SHOWTIME has picked up a second season of its half-hour comedy series FLATBUSH MISDEMEANORS. Created by Kevin Iso (High Fidelity) and Dan Perlman (That’s My Bus!), who both star, FLATBUSH MISDEMEANORS is a raw comedy of city life following Dan and Kevin, who play characters struggling to thrive in their new surroundings in Flatbush, Brooklyn. The show explores two long-time friends seeking to climb out of their heads and connect with others. Season one cast also includes Kristin Dodson (The Shivering Truth), Hassan Johnson (The Wire), Kareem Green and Kerry Coddett.

FLATBUSH MISDEMEANORS is an adaptation of Iso and Perlman’s digital series of the same name. For their work writing, directing and starring in the shorts that form the foundation of the series, Iso and Perlman won Best North American Short Film at the London Film Festival, with the first installment becoming Oscar(R) qualified following a Grand Jury Award for Best Narrative Short at the Florida Film Festival. FLATBUSH MISDEMEANORS is a co-production by SHOWTIME and Avalon (Breeders, Last Week Tonight with John Oliver, Starstruck), which will continue to act as lead studio. The series is executive produced by Perlman and Iso, with Richard Allen-Turner, Jon Thoday, David Martin and Chloe Pisello for Avalon.

Check out our status sheets to track new TV series pickups, renewals, and cancellations. You can find lists of cancelled shows here.
What do you think? Have you watched the Flatbush Misdemeanors TV series on Showtime? Are you glad to hear that it’s been renewed for a second season?