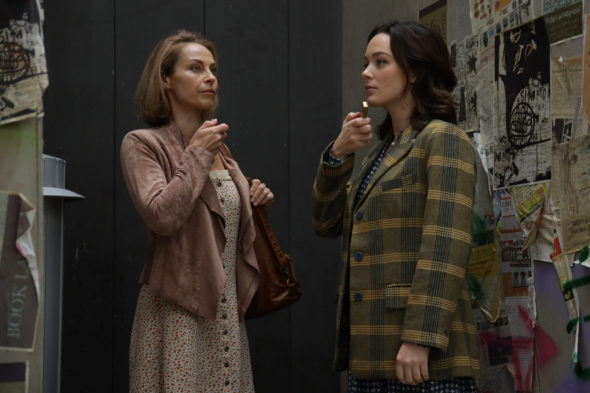 A Freeform supernatural drama, the Motherland: Fort Salem TV show stars Taylor Hickson, Jessica Sutton, Ashley Nicole Williams, Amalia Holm, Demetria McKinney and Lyne Renee. The series is set in an alternate version of present-day America. In this reality, witches ended their persecution 300 years ago by cutting a deal with the United States government to fight for their country. The story follows three young women from basic training in combat magic into terrifying and thrilling early deployment. In this world, the traditional roles of gender and power are flipped with women on the front lines, the fight looming and terrorist threats that are strikingly familiar to our world, but with supernatural tactics and weapons. In the second season, Raelle (Hickson), Tally (Sutton), and Abigail (Williams) confront higher stakes, dangerous magic and a new threat from an ancient group of witch-hunters, the Camarilla.

*8/24/21 update: Motherland: Fort Salem has been renewed for a third and final season.

I love the show season three needs to come now.

i’m from brazil and i loved this series don’t cancel it i love this series so much it’s a harry potter 2.
I will be looking forward to season 3.
I loved all the characters and the story is amazing and original. Thanks to the creators.

This show has been amazing. The first season was really mysterious and kind of slowed paced, although I really enjoyed. This second season just keeps getting better with each new episode. We can really see the work being put in creating this universe, and personally, it is being done incredibly.
All actresses are doing an excellent job. The writing is impeccable. And the cinematography is just as good.
Please don’t cancel this show. I’ll be forever traumatized

Love this show, the writing is incredible! The characters are lovable and the story line is unpredictable. I’m looking forward to seeing what the future seasons will bring.

Oh yeah, witch weaver/witching etc, keep it coming. The series as you can tell I’m a big fan from last year. Thanks for bringing the show back.

Please keep this series alive and well. Just think about what they did to Star Trek. With everyone cutting cable I hope these comments are being taken seriously!