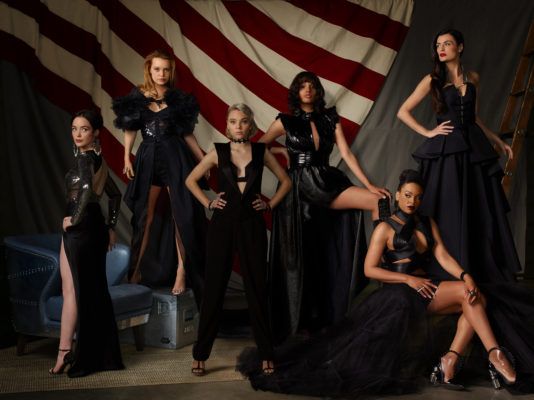 TV show description:
A drama series created by Eliot Laurence, the Motherland: Fort Salem TV show is set in an alternate version of present-day America. In this reality, witches ended their persecution 300 years ago by cutting a deal with the United States government to fight for their country.

The story follows three young women from basic training in combat magic into terrifying and thrilling early deployment. In this world, the traditional roles of gender and power are flipped with women on the front lines, the fight looming and terrorist threats that are strikingly familiar to our world, but with supernatural tactics and weapons.

Raelle (Hickson) is a reluctant recruit with major authority issues. Her mother recently died in the line of duty. Another young recruit, Tally (Sutton) is a kind but strong-willed and curious witch who enlisted despite her mother’s passionate disapproval.

Meanwhile, Abigail (Williams) is an unquestionably alpha, smart, driven, and courageous witch who hails from the upper echelons of military witch society. She’s excited to be joining the ranks of the witches’ army. Scylla (Holm) is a playful yet dark and mischievous recruit who is not what she appears to be.

A tough but wryly humorous drill sergeant, Anacostia’s (McKinney) chief concern is keeping the young recruits alive through basic training. General Sarah Alder (Renee) is the highest-ranking officer in the Armed Forces and the only leader the witches have ever known.

Series Finale:
Episode #30
This episode has not aired yet.
First aired: TBD

What do you think? Do you like the Motherland: Fort Salem TV show? Do you think it should be ending or renewed for a fourth season?

I’m so sick of all these networks starting great shows like Motherland and canceling them with the slightest drop in ratings. Just to start another show that gets canceled after one or two seasons they get us interested and then they just drop it. Someone needs to do something about it.

I absolutely love this show. would totally recommend t watch it. Hope they don’t cancel it. This is the best drama series i ever watched so far.

I absolutely LOVE this show its the best new show out there. The depth is amazing they could go very far with this show and hopefully they do.

Motherland: Fort Salem is one of the best new shows in the genre of drama with a sci-fi/supernatural/fantasy aspect. It focuses on strong young women. The concept is original: in an alternate history, the witches of Salem, Massachusetts did not go quietly to the Pilgrims’ flames. They fought back. The two sides reached an agreement, the Salem Accords, whereby the Pilgrims agreed to respect the witches rights to exist openly, and the witches agreed to help lead the US military. The show follows a squad of new witch cadets as they learn to adapt to military life and each other,… Read more »

Love this show, I watch with my daughter, we are both glued to the television when it’s on, looking forward to the second season.

Outstanding, refreshing, glued to the T.V. when watching is innovative, real drama with history. Please do not cancel this worth watching drama.