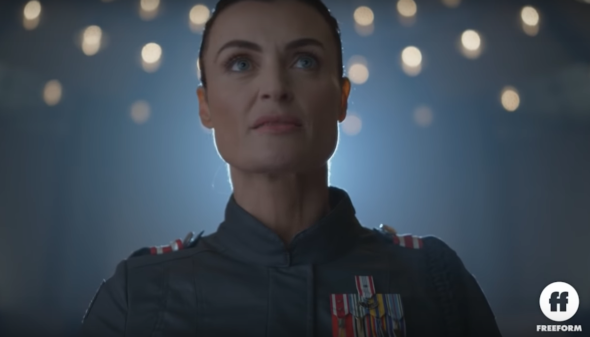 “You are among your own kind now.” Freeform has just ordered a new TV show called Motherland: Fort Salem.

The supernatural series “is set in an alternate, present-day America where witches ended their persecution 300 years ago by cutting a deal with the U.S. government to fight for their country.”

Freeform announced today that it has picked up to series “Motherland: Fort Salem,” a one-hour drama from executive producers Will Ferrell, Adam McKay and Kevin Messick, for ten episodes. The series, created by Eliot Laurence (who also created “Claws”), is set in an alternate, present-day America where witches ended their persecution 300 years ago by cutting a deal with the U.S. government to fight for their country. “Motherland: Fort Salem” follows three young women from basic training in combat magic into terrifying and thrilling early deployment. In this world, the traditional roles of gender and power are flipped with women on the front lines, the fight looming and terrorist threats that are strikingly familiar to our world, but with supernatural tactics and weapons.

“We’re so excited to be able to tell this story rich with female empowerment, complex storytelling and an incredibly creative canon,” said Tom Ascheim, president, Freeform. “While set in an alternative universe, ‘Motherland: Fort Salem’ will continue the authentic and issues-driven storylines that our network is known for, and what our audience has come to expect. We are thrilled to be working with Eliot, Will, Adam and Kevin on this exceptionally creative tale and look forward to bringing this even further to life.”

“A writer couldn’t ask for more loyal and nurturing partners than Gary Sanchez and Freeform,” said Laurence. “I could not be more thrilled and grateful to share this long-simmering labor of love with the world.”

“Will, Adam and I couldn’t be more excited about the opportunity to take Eliot’s vision to series. “Motherland: Fort Salem” is bold and original storytelling and Freeform has been incredibly supportive in helping us realize Eliot’s alternate version of America. We can’t wait to get started on the season,” said Messick.

Added McKay, “So excited Freeform has given a platform to one of the most original writers working today; Eliot Laurence. Sanchez has worked with Eliot for years and he has astounded us yet again with the imaginative and layered world of Motherland: Fort Salem.”

Taylor Hickson (“Deadly Class”) portrays Raelle, a reluctant recruit with major authority issues whose mother recently died in the line of duty. Jessica Sutton (“The Kissing Booth”) is Tally, a kind, strong-willed and curious witch who enlisted despite her mother’s passionate disapproval. Amalia Holm (“Playground”) rounds out the young witch recruits, playing Scylla, a playful yet dark and mischievous recruit who is not what she appears to be. Demetria McKinney (“The Saints and Sinners”) plays Anacostia, a tough but wryly humorous drill sergeant whose chief concern is keeping the young recruits alive through basic training. Additional cast will be announced at a later date.

What do you think? Are you interested in supernatural dramas? Will you check out Motherland: Fort Salem?

I can’t wait! These are my favorite type of shows. Please keep it coming!
Thank You!

I can’t wait! These are my favorite type shows and there are not enough of them. Please keep it coming!
Thank You!

I love supernatural shows. I cannot wait to watch it.