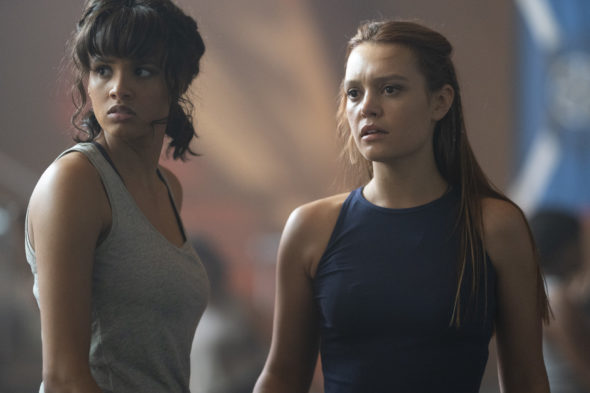 A Freeform drama series created by Eliot Laurence, the Motherland: Fort Salem TV show stars Taylor Hickson, Jessica Sutton, Ashley Nicole Williams, Amalia Holm, and Demetria McKinney with Lyne Renee, Kai Bradbury, and Sarah Yarkin in recurring roles. It is set in an alternate version of present-day America. In this reality, witches ended their persecution 300 years ago by cutting a deal with the United States government to fight for their country. The story follows three young women from basic training in combat magic into terrifying and thrilling early deployment. In this world, the traditional roles of gender and power are flipped with women on the front lines, the fight looming and terrorist threats that are strikingly familiar to our world, but with supernatural tactics and weapons.

*5/19/20 update: Motherland: Fort Salem has been renewed for a second season on Freeform.

the series is fantastic. Please do a second season

A second season has so much potential I hope it renews, love the show

This is one hell of a show. It’s so different from the rest of television right now & that difference is utterly refreshing. As you go on this journey with the characters, all of them not just the main women, you find yourself wanting this alternate version to be a real possibility… Even the unpleasant aspects such as the Spree, terrorism & the emotional turmoil we witness. The writers & creators did an incredible job making this as real as they could for viewers. It’s not bright, flashy or ridiculous when it comes to “The Work” (aka magic). Just the… Read more »

Motherland:Fort Salem—This is an award winning show—great writing , great drama –best acting and emotion I have seen in a long time from main characters and entire cast –many a destiny was meant to meet for this one–only time can tell the fortune of all of these unions—-amazing

I absolutely love this show. I can’t get enough of it. It just keeps getting better and better. I’ve DVR’d it and watch the previous episodes over and over. It needs to be renewed next year.

I agree I love this show and can’t wait for season 2 and more. Please don’t disappoint RENEW THE SHOW

Season 2 needs to be on now. I am hooked! This show is an absolute gem. Saw the trailer and thought it looked meh but what an absolute surprise. Literally one of the best shows on TV right now.

THIS SHOW IS SO AMAZING!!!!!!! THE GENDER SWAPS AND THE ALL WOMEN CAST IS JUST AMAZINGLY BEAUTIFUL!!!!!!! THE CHARACTERS DEVELOPMENT FROM EPISODE 1 TO 7 IS JUST MIND BLOWING!!!!!!!!!! AND THEY EACH GET THE SAME AMOUNT OF SCREEN TIME WHEREAS IN MOST SHOWS, ONE CHARACTER GETS MORE SCREEN TIME THAN THE OTHER!!!!! BUT THAT’S NOT THE CASE!!!!!! I LOVE THIS SHOW SO MUCH AND IT DESERVES A SEASON 2,HANDS DOWN!!!!!!!!!

This show needs to be renewed like right now. It the best show ever been on TV. Full of strong Charakters, divers backgrounds, remarkable LGBT+ representation. The Cast is perfect. The chemistry between them is beautiful.

Deserves a renewal! Great character development in the first 3-4 episodes. Hail Beltane is Sizzling!! I see this series as how I envision the change we need in the world.