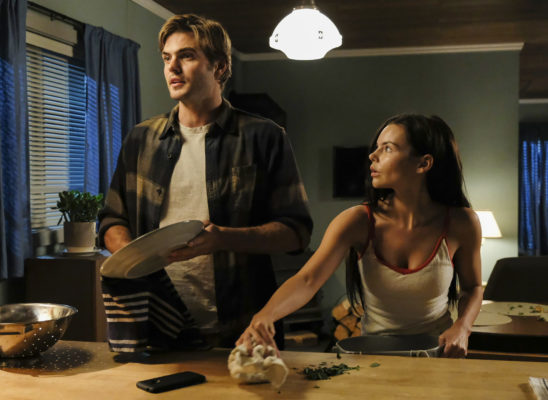 Who will survive the third season of the Siren TV show on Freeform? As we all know, the Nielsen ratings typically play a big role in determining whether a TV show like Siren is cancelled or renewed for season four. Unfortunately, most of us do not live in Nielsen households. Because many viewers feel frustration when their viewing habits and opinions aren’t considered, we invite you to rate all of the third season episodes of Siren here. *Status Update Below.

A Freeform mystery thriller, Siren stars Eline Powell, Alex Roe, Fola Evans-Akingbola, Ian Verdun, and Rena Owen. The TV show is set in the small fishing village of Bristol Cove which is known for its legend of once being home to mermaids. When the legend proves to be true, the battle between man and sea takes a very vicious turn as these predatory beings return to reclaim their right to the ocean. In season three, Ben’s shocking decision to let the reporter die has ripple effects in his relationship with Maddie and Ryn. Meanwhile, a dangerous, sophisticated new mermaid arrives in Bristol Cove, challenging Ryn’s leadership and igniting an epic undersea battle between rival tribes. All of this is complicated by the fact that Ryn’s baby, now being carried by a surrogate, must be protected at all costs.

What do you think? Which season three episodes of the Siren TV series do you rate as wonderful, terrible, or somewhere between? Do you think that Siren should be cancelled or renewed for a fourth season on Freeform? Don’t forget to vote, and share your thoughts, below.

There has to be a season 4. My entire family throughly enjoys this program. It will be sorely missed if we fail to have another season.

Most Definitely need a series 4 , why not !!!
Love the programme love the sea and so so wish I was a mermaid /siren

Siren is an awesome Scifi. PLEASE PLEASE don’t cancel it! Ive watched EVERY EP and season. And have hooked many of my friends up.

I love this series plz dont cancel it…i really don’t watch tv shows much but this one caught my attention. Im patiently waiting on season 4

I love the series Siren I hope it will have a season4..

When will be siren’s season4 coming out