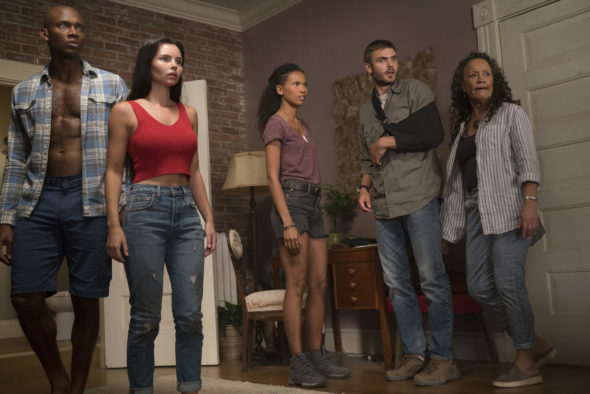 Will the battle in Bristol Cove continue? Has the Siren TV show been cancelled or renewed for a third season on Freeform? The television vulture is watching all the latest cancellation and renewal news, so this page is the place to track the status of Siren, season three. Bookmark it, or subscribe for the latest updates. Remember, the television vulture is watching your shows. Are you?

A Freeform mystery thriller, Siren stars Alex Roe, Eline Powell, Fola Evans-Akingbola, Ian Verdun, and Rena Owen. The drama is set in Bristol Cove, a small fishing village which, according to the lore, was once home to mermaids. When the legend proves to be true, the struggle between humans and these predatory creatures begins.

The second season of Siren averaged a 0.16 rating in the 18-49 demographic and 479,000 viewers. Compared to season one, that’s down by 32% in the demo and down by 28% in viewership. Learn how Siren stacks up against the other Freeform TV shows.

Will Freeform cancel or renew Siren for season three? The series is doing okay in the ratings when compared to other shows on the channel so I think it will be renewed. I’ll keep an eye on the ratings and update this page with breaking developments. Subscribe for free Siren cancellation or renewal alerts.

What do you think? Are you happy the Siren TV show w was renewed for season three? How would you feel had Freeform cancelled this TV series, instead?

Keep it going. Love the show! Rhin is a hottie!

Don’t cancel and I love this show, please keeper going on. I was watch serin season 1 to 2 but why 3 season is cancel?? I was disappointed but please back on season 3 and make a more for season 4 or 5 or whatever u can do more seasons.