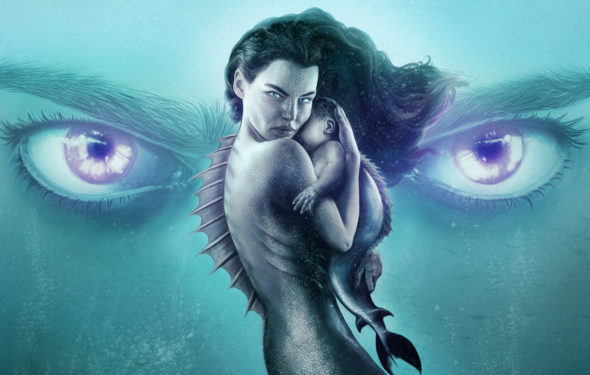 Last year, despite a big drop in the ratings, Siren was Freeform’s highest-rated original series. Will the numbers continue to fall this year or, will they grow? Will the show remain a success either way? Will Siren be cancelled or renewed for season four? Stay tuned. *Status Update Below.

A mystery thriller series, Siren stars Eline Powell, Alex Roe, Fola Evans-Akingbola, Ian Verdun and Rena Owen. The TV show is set in the small fishing village of Bristol Cove which is known for its legend of once being home to mermaids. When the legend proves to be true, the battle between man and sea takes a very vicious turn as these predatory beings return to reclaim their right to the ocean. In season three, Ben’s shocking decision to let the reporter die has ripple effects in his relationship with Maddie and Ryn. Meanwhile, a dangerous, sophisticated new mermaid arrives in Bristol Cove, challenging Ryn’s leadership and igniting an epic undersea battle between rival tribes. All of this is complicated by the fact that Ryn’s baby, now being carried by a surrogate, must be protected at all costs.

What do you think? Do you like the Siren TV series on Freeform? Should it be cancelled or renewed for a fourth season?

This needs to come back. Great show. I hate sitcoms or TV series and this one kept me hooked. To many questions are left and we need to know: did Ben die or did he survive? Did he become a mermaid or no? Does Ryn figure out what happen to him? Does ryn stay on land & risk becoming human not being able to transform again with her daughter or will she live in the sea? Given the fact she rules the ocean now she can’t stay on land or give it up to be human. Will hope grow up… Read more »

NOOOOO!!!! Another one of my favorite shows gone! I want an ending please. Not another show left hanging. Once again Freeform cancels another excellent show! Look at the number of cancelled shows!!! Way too many. Oh well. I barely watch freeform anymore

Siren is my favorite show! Each season gets better and better! Please renew for season 4 and hopefully seasons 5 and 6! This is still your top show despite the ratings have dropped. As a network, you would be foolish to cancel this series. There is still more of this story to be told!

PLS DONT CANCEL I LOVE THIS SHOW.CHANGE YOUR MIND AND PLS BRING IT BACK!PLS PLS!!!!

I love this show. Please keep it on! People will catch up to it’s unique story line. Its interesting, entertaining and my friends love it.

PLEASE GIVE US SIREN SEASON FOUR. IT IS MY FAVORITE SHOW OF ALL TIME AND ALL THE GREAT WRITERS, CAST AND CREW DESERVE AT THE LEAST FOUR MAYBE EVEN FIVE AND SIX..

I love the show siren, I really hope they bring it back! We need a season four !

I love the show please don’t cancel it I want another season….

Keep it coming pleasee.. i love thiss show. I always wait this show every weekk dont cancel it pleaseee

We need a season 4 please! Keep it coming! I love this show!

I like the suspense and action, and the fairy tale of mermaids Please, Please put it back on thank you!