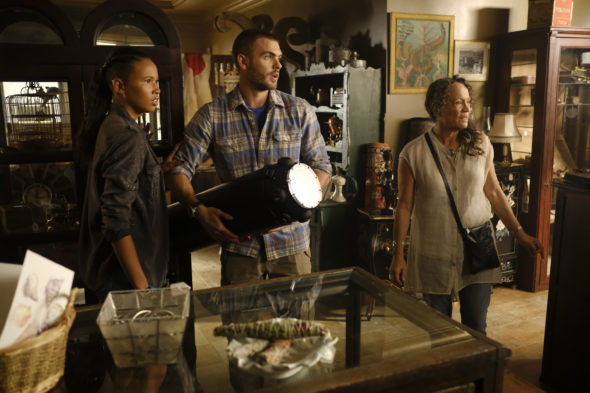 How goes Ben and Maddie’s search for the truth about Ryn, during the first season of the Siren TV show on Freeform? As we all know, the Nielsen ratings typically play a big role in determining whether a TV show like Siren is cancelled or renewed for season two. Unfortunately, most of us do not live in Nielsen households. Because many viewers feel frustration when their viewing habits and opinions aren’t considered, we’d like to offer you the chance to rate all of the Siren season one episodes here.

A Freeform mystery thriller, the first season of Siren stars Alex Roe, Eline Powell, Fola Evans-Akingbola, Ian Verdun, Rena Owen, Sibongile Mlambo, Chad Rook, Aylya Marzoff, Ron Yuan, Tammy Gillis, Curtis Lum, Anthony Harrison, Hannah Levien, Andrew Jenkins, David Kaye, and Sedale Threatt, Jr. The drama is set in Bristol Cove, a small fishing village which, according to the lore, was once home to mermaids. One day, the enigmatic Ryn (Powell) arrives in town. While Ben (Roe), a marine biologist, finds himself drawn to her, his co-worker, Maddie (Evans-Akingbola), is deeply suspicious of the newcomer. Together, they set out to uncover the truth. **Status update below.

What do you think? Which season one episodes of the Siren TV series do you rate as wonderful, terrible, or somewhere between? Did you think Freeform would cancel or renew Siren for a second season? Don’t forget to vote, and share your thoughts, below.

**5/15/2018 Status Update: Siren has been renewed for season two on Freeform. Details here.

I love. Love. Love thais show! I look forward to next season!!!!

This show is AMAZING!!!!

Please do not cancel the show it is getting good

I love this show. Freeform, please don’t cancel it!

I am absolutely mesmerised by the show. Siren is one of the most interesting TV shows out there. I love the adventures of the mermaids and how they transition to land and the human ways. You chose the perfect person to play the roll of Run. I was disappointed that the series ended so quick and I truly look forward to Series 2. Where is not one thing I would change in this show I feel everything was scripted and produced perfectly thank you for continuing Siren.

Siren — excellent series I really look forward to the next show, it’s original with a good story line.

pls I love this show, you cancelled Beyond. plz don’t be stupid u have to keep this show. I’m tired of all your cancellations. If this show does not return I’m done!!!!!! I will no longer watch your channel.

A drama fan from China

I’m worried about it, and there’s no second season.If this is true, I’m going to be disappointed.
Please make the second season

BEST SHOW EVER PLEASE DO NOT CANCEL

A drama fan from China
Reply to  LINDA

正在使用发音
I also hope to have second seasons

I love this show !!!My family and I watch it every week and always look forward to every episode. Please make season 2…

This is really a great show. This show brought me back to television.