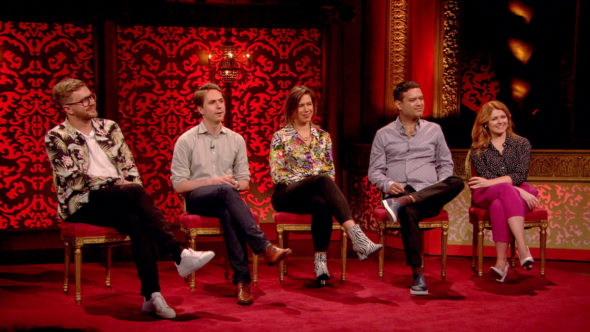 Is this UK series a winner in the US? Has the Taskmaster TV show been cancelled or renewed for a second season on The CW? The television vulture is watching all the latest cancellation and renewal news, so this page is the place to track the status of Taskmaster, season two. Bookmark it, or subscribe for the latest updates. Remember, the television vulture is watching your shows. Are you?

Airing on The CW television network in the United States, the Taskmaster TV series stars comedian Greg Davies in the title role of the all-powerful Taskmaster. In each installment, he issues simple but comedic and bizarre tasks to five regular contestants which are typically comedians. Show creator Alex Horne acts as the Taskmaster’s assistant. The tasks are usually performed in isolation but are occasionally taken on in teams. They’re designed to encourage the players to think laterally and creatively to complete the tasks. The final challenge is performed live in the studio with the episode’s winner taking home the donated items. At the end of a season, the person with the most number of points wins a golden bust of the Taskmaster.

The first season of Taskmaster averages a 0.10 rating in the 18-49 demographic and 212,000 viewers. Find out how Taskmaster stacks up against other The CW TV shows.

Will The CW cancel or renew Taskmaster for season two? The series launched in the UK in 2015 and England’s Channel 4 has renewed the series through season 15. Season 10 is expected to air on Channel 4 in Fall 2020. The CW decided to air episodes from season eight so additional seasons have already been shot, should the network want to license them. Though the ratings are very low, I suspect that we may still see another season on The CW. I’ll update this page with breaking developments. Subscribe for free alerts on Taskmaster cancellation or renewal news.

8/6/20 update: Taskmaster was pulled after one episode by the network.

What do you think? Were you hoping that the Taskmaster TV show would be renewed for a second season on The CW? Are you sorry that the network cancelled this TV series, instead?

Yet another crappy program lovingly set before us by loser CW. I thought by now you’d run out of people who’d work cheap just to get on tv. Guess not.