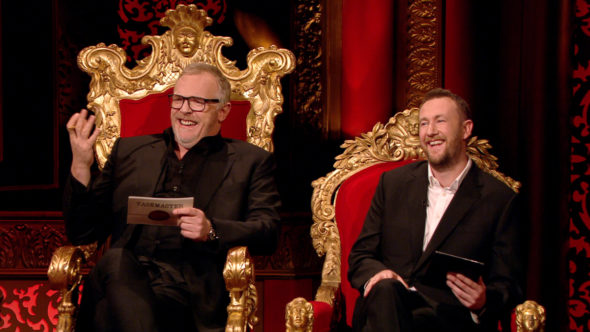 TV show description:
A comedy panel game show which launched in the UK in 2015, the Taskmaster TV series stars comedian Greg Davies in the title role of the all-powerful Taskmaster. In each installment, he issues simple but comedic and bizarre tasks to five regular contestants which are typically comedians. Show creator Alex Horne acts as the Taskmaster’s assistant.

The tasks are usually performed in isolation but are occasionally taken on in teams. They’re designed to encourage the players to think laterally and creatively to complete the tasks.

Each episode begins with a Prize Task where each contestant donates a prize to the competition, following a given theme (a favorite piece of clothing, most treasured item, etc.). Several pre-recorded random tasks follow like “impress this mayor in 20 seconds”, “empty this bathtub as quickly as possible”, etc.

Once a task is completed by all, the contestants plead their case to the Taskmaster and try to convince him why their methodology was the best. Points are awarded with the winner receiving five points, second place receiving four points, and so on.

The final challenge is performed live in the studio with the episode’s winner taking home the donated items. At the end of a season, the person with the most number of points wins a golden bust of the Taskmaster.

What do you think? Do you like the Taskmaster TV show? Do you think it should have been cancelled or renewed for a second season on The CW?