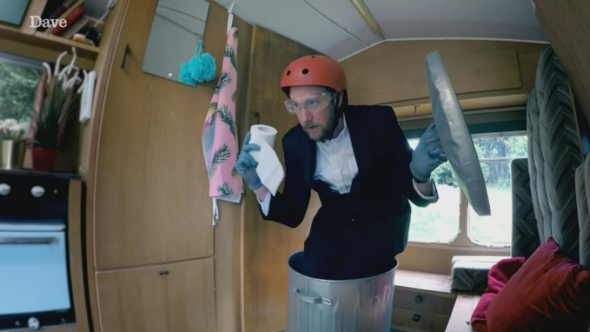 Who will win the golden bust in the first season of the Taskmaster TV show on The CW? As we all know, the Nielsen ratings typically play a big role in determining whether a TV show like Taskmaster is cancelled or renewed for season two in the United States. Unfortunately, most of us do not live in Nielsen households. Because many viewers feel frustration when their viewing habits and opinions aren’t considered, we invite you to rate all of the first season episodes of Taskmaster here. *Status Update Below.

A CW comedy panel game show that originates in the UK, the Taskmaster TV series stars comedian Greg Davies in the title role of the all-powerful Taskmaster. In each installment, he issues simple but comedic and bizarre tasks to five regular contestants which are typically comedians. Show creator Alex Horne acts as the Taskmaster’s assistant. The tasks are usually performed in isolation but are occasionally taken on in teams. They’re designed to encourage the players to think laterally and creatively to complete the tasks. The final challenge is performed live in the studio with the episode’s winner taking home the donated items. At the end of a season, the person with the most number of points wins a golden bust of the Taskmaster.

What do you think? Which season one episodes of the Taskmaster TV series do you rate as wonderful, terrible, or somewhere between? Do you think that Taskmaster should be cancelled or renewed for a second season on The CW? Don’t forget to vote, and share your thoughts, below.

*8/6/20 update: Taskmaster was pulled after one episode by the network.

This show runs already for 9 seasons in the UK (a channel named: Dave). And if you like British humor, you are in for a treat. There is/was even an attempt to have an US version, with a different taskmaster, but the same “assistant”. Loving the format/formula of the show and it was applied with the US edition as well, except less tasks and shorter episodes. Seeing a few of those episodes and you appreciate what marvelous job Greg Davies does as taskmaster. And that there is a significant difference in out-of-the-box thinking between the comedians playing in both shows.… Read more »