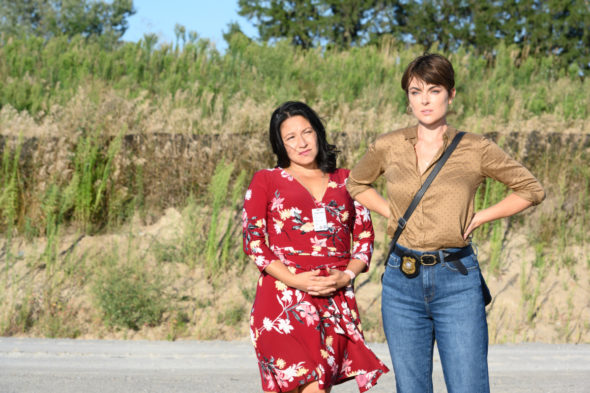 Can Jenny find balance in her life in the second season of the Coroner TV show on The CW? As we all know, the Nielsen ratings typically play a big role in determining whether a TV show like Coroner is cancelled or renewed for season three. Unfortunately, most of us do not live in Nielsen households. Because many viewers feel frustration when their viewing habits and opinions aren’t considered, we invite you to rate all of the second season episodes of Coroner here.  *Status Update Below.

What do you think? Which season two episodes of the Coroner TV series do you rate as wonderful, terrible, or somewhere between? Do you think that Coroner should be cancelled or renewed for a third season on The CW? Don’t forget to vote, and share your thoughts, below.

I am still waiting to find out about the final episode “Crash” listed on the IMDb website. No reason given for it.

This is the worst show that I ever looked at everybody in this picture is crazy I mean Look at the corner on channel 10 if you want some advice because they do it right you guys are doing it all wrong. I give you a 1 For effort

My favorite show on TV this season….Sirinda Swan is so great in this show…she is beautiful by the way, too….I will not miss this show…I hope it survives the ratings game….this is a show that needs more support…more advertising….for it. DO NOT CANCEL this…it is unique….and that is why I watch it….I am so tired of most of these so called dramas…this one to me is perfect.

I love this show! Please don’t take it off!

I have watched The Coroner on CBS so have seen season #2 I’m hoping for a season#3 its
a terrific show.

I recorded this show so I could watch at a more convenient time and I really enjoy watching it. I hope they renew it for as long as they can come up with great story lines.

I was surprised that I truly enjoy Coroner season one and I can’t wait to watch the second season. I hope that CW will renewal the show for the 3 seasons.

This is a fantastic show. Unfortunately it aired when vice presidential debate happened so next week more people can watch Coroner. Great cast, storylines and writers.