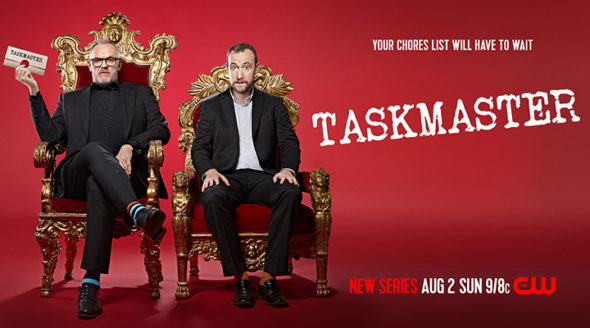 The Taskmaster TV series debuted in 2015 on Channel 4 in the UK. Nine seasons have aired so far (two cycles a year) and the series has been renewed through season 15. In other words, there are plenty of episodes that The CW could license but, will they? Will the ratings be good enough to bring the show back to the smallest network? Will Taskmaster be cancelled or renewed for season two on The CW? Stay tuned.  *Status Update Below.

A UK comedy panel game show, the Taskmaster TV series stars comedian Greg Davies in the title role of the all-powerful Taskmaster. In each installment, he issues simple but comedic and bizarre tasks to five regular contestants which are typically comedians. Show creator Alex Horne acts as the Taskmaster’s assistant. The tasks are usually performed in isolation but are occasionally taken on in teams. They’re designed to encourage the players to think laterally and creatively to complete the tasks. The final challenge is performed live in the studio with the episode’s winner taking home the donated items. At the end of a season, the person with the most number of points wins a golden bust of the Taskmaster.

8/3 update: You can see the latest night’s ratings in context.

What do you think? Do you like the Taskmaster TV series? Should it be cancelled or renewed for a second season on The CW?

*8/6/20 update: Taskmaster was pulled after one episode by the network.