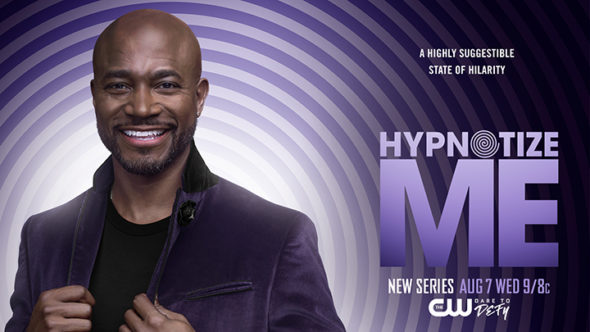 Although drama is The CW’s stock-in-trade, the network also likes to dabble in game shows and other unscripted series, particularly in the summer. Now they’ve introduced a new comedic take on the format, the Hypnotize Me TV show. Can it win the hearts and minds of the fickle warm-weather audience? Will Hypnotize Me be cancelled or renewed for season two? Stay tuned.

A CW game show hosted by Taye Diggs, Hypnotize Me is based on the British series, You’re Back In The Room. Resident hypnotist Keith Barry hypnotizes the contestants, who then have to perform assigned tasks while they’re under, in hopes of winning big money.

9/26 update: You can see the latest night’s ratings in context.

What do you think? Do you like Hypnotize Me TV series on The CW? Should it be cancelled or renewed for a second season?

I absolutely loved this show and never stopped laughing.
In a world full of nastiness and hatred, this is the best medicine for anybody to see.
I pray it continues, soooo worth everybody seeing for a good laugh.

We love this show! We always turn it on when have company over! So we can all laugh together! Please renew!! It is good for our souls to laugh! Please please please renew!!

Loved this show so much. Recorded it and had our company watch it too , they couldn’t stop laughing I hope it’s renewed. I can’t stop telling people about it.

I LOVED that show and anxiously waited for Wednesday night to see it. We all need a good laugh these days, and I belly laughed every time I saw that show! Please don’t take it off!!!

OMG! I LOVE THIS SHOW!.. I LITERALLY HAVE NOT HAD A GOOD HEARTY LAUGH IN ABOUT 10 YEARS! ME AND MY HUSBAND WATCH THE BEST FAITHFULLY EVERY TIME THAT IT’S ON..

Cancel it. Terrible abuse of something that actually helps people.

You have got to be kidding me. This show is absolutely hilarious. Get a sense of humor. No one gets hurt and the participants get a chance to see what they did and have a good laugh at their self.

i think the show is great. very funny, keep it on.