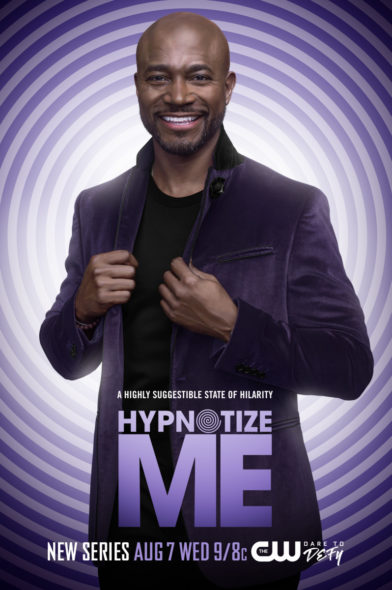 How entrancing is the first season of the Hypnotize Me TV show on The CW? As we all know, the Nielsen ratings typically play a big role in determining whether a TV show like Hypnotize Me is cancelled or renewed for season two. Unfortunately, most of us do not live in Nielsen households. Because many viewers feel frustration when their viewing habits and opinions aren’t considered, we’d like to offer you the chance to rate all of the Hypnotize Me season one episodes here.

A CW comedy game show hosted by Taye Diggs, Hypnotize Me is based on the British series, You’re Back In The Room. Resident hypnotist Keith Barry hypnotizes the contestants, who then have to perform assigned tasks while they’re under, in hopes of winning big money.

What do you think? Which season one episodes of the Hypnotize Me TV series do you rate as wonderful, terrible, or somewhere between? Should The CW cancel or renew Hypnotize Me for a second season? Don’t forget to vote, and share your thoughts, below.

Hypnotize me is the best show I have seen in about 30 years or more I pray it doesn’t get canceled, I would watch it over and over gain

The episode while the man had to pee when he heard a bell ring has me on the floor laughing! My stomach was so sore….I love this show please give me another season!

I was channel surfing when I saw this show and just had to watch. It was so funny to see how the contestants reacted to the suggestions and then, after seeing the episode, were “let in on” all that happened. It was truly impromptu, unrehearsed TV at its best!

I love the new show. Seeing people do things they normally don’t do and the response of their family in the audience is really funny.

The best show that I have seen in a long time. I would like to see more of this show in the future