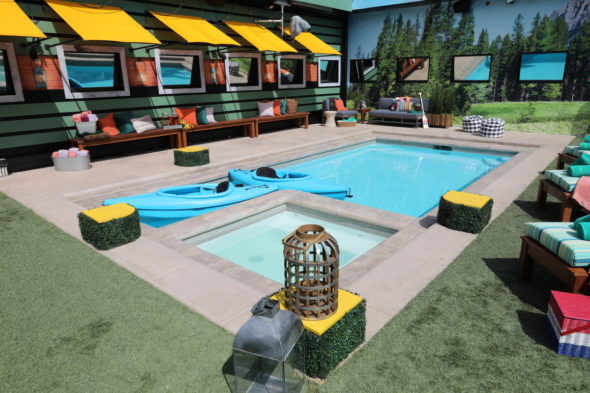 Are you all in for the 21st season of the Big Brother TV show on CBS, or ready to self-evict? As we all know, the Nielsen ratings typically play a big role in determining whether a TV show like Big Brother is cancelled or renewed for season 22. Unfortunately, most of us do not live in Nielsen households. Because many viewers feel frustration when their viewing habits and opinions aren’t considered, we’d like to offer you the chance to rate all of the Big Brother season 21 episodes here. *Status update below.

A CBS reality TV series hosted by Julie Chen Moonves, Big Brother typically airs three nights a week — Wednesdays (veto), Thursdays (eviction), and Sundays. In the 20th season, the new contestants are Holly Allen, David Alexander, Nicole Anthony, Tommy Bracco, Kathryn Dunn, Kemi Faknule, and Cliff Hogg III. Big Brother follows a group of people living together in a house outfitted with 94 HD cameras and 113 microphones, recording their every move 24 hours a day. Each week someone is voted out of the house. The last remaining Houseguest wins the grand prize of $500,000.

What do you think? Which season 21 episodes of the Big Brother TV series do you rate as wonderful, terrible, or somewhere between? Should CBS cancel or renew Big Brother for a 22nd season? Don’t forget to vote, and share your thoughts, below.

My favorite show of all times. I can hardly wait for the summer seasons to get here for it to start. Some say it’s a lame show but let’s see them be put inside that home with out music- tv – cell phones & connection to outside world & see how hard this game actually is. I’m just sorry Cliff talked Nicole into getting rid of Tommy. The end would have been so different. I feel she made a $500,000 mistake.

Neither Michie nor Holly should win. I wish the Jury could refuse to vote. I guess that’s not allowed via CBS contract. However Nicole made many mistakes trusting Cliff.

I have enjoyed season 21. Even though things didn’t always go the way I wanted. I was also thinking for season 22 you ought bring back one contestant from each season. I no that means 21 contestants. So maybe could like have 3 on the block for a few weeks so you can fit into your season lenght. I have watched since season 3 and I can’t wait each year it to start. I was so glad when you started celebrity big brother. Thank you for listening to us

One of the dumbest shows on television and it just gets worse every year, Cancel it already!

I would be do sad if it ended something I look forward to every year.

Me too! There’s just so much junk on tv they call comedy that I call trash & other is killing so it doesn’t leave much to watch.

You have made this the stupidest season of the show. I love the show but it’s so juvenile and silly! These are adults! Or is your target audience 8 to 10 year olds???

I LOVE Big Brother! Please keep it on!! Its my favorite show!

Season 21 for me is a major disappointment because of the new camp comeback.

Cast is a real bummer

This is a show that should be on MTV or VH1, not a channel we all have access to.

Big brother is one of the best shows ever and I’m glad Julie Chen Moonvess has came back it wouldn’t be the same without her. My hope is to go on this show one season and see what this 53 year old woman can do lol

I totally agree! I love this show! I would love to go on it one day!