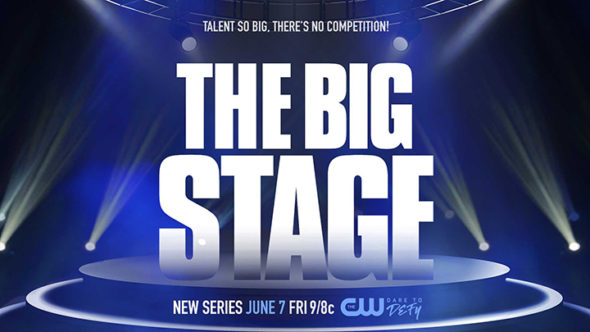 During the regular TV season, The CW rolls out mostly scripted dramas to win its modest slice of the Nielsen ratings pie. In the summertime though, they tend to shake things up. The littlest network airs docu-series about death, improv series, magic shows, British and Canadian imports, and under-performing, critically acclaimed original fare that couldn’t quite earn its keep during the cooler months. Enter The Big Stage TV show. Does this newcomer have what it takes to draw in the active summer audience? Will The Big Stage be cancelled or renewed for season two? Stay tuned.

A CW non-competitive talent show from executive producers David McKenzie and David Martin, The Big Stage is hosted by Elizabeth Stanton and James Maslow. The series shines a spotlight on 44 diverse, experienced performers, including singers, jugglers, ventriloquists, quick-change artists, stand up comics, acrobats, aerial dancers, animal acts and more, as they show what they’ve got to both a live studio audience and home viewers.

What do you think? Do you like The Big Stage TV series on The CW? Should it be cancelled or renewed for a second season?

I love watching these kinda of shows so far they are good. I can’t wait for this series to be renewed for more seasons can you please stop ruining these programming shows

I watched the first minutes of “The Big Stage” tonight, which featured an act having a few teen guys doing a dance routine. And the designs on their T-shirts were absurdly BLURRED. So I’m DONE with ever watching that show again. That was POINTLESS!