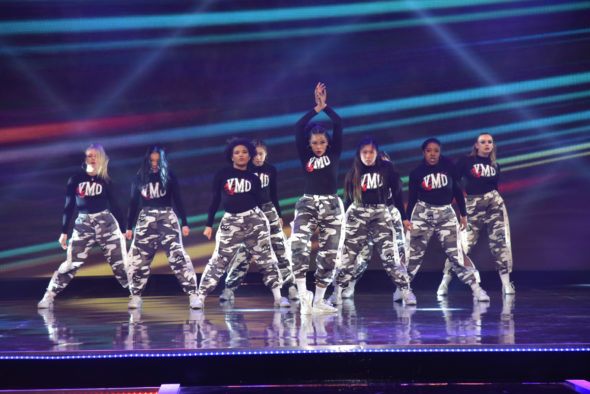 Must the show go on? Has The Big Stage TV show been cancelled or renewed for a second season on The CW? The television vulture is watching all the latest cancellation and renewal news, so this page is the place to track the status of The Big Stage, season two. Bookmark it, or subscribe for the latest updates. Remember, the television vulture is watching your shows. Are you?

A The CW non-competitive talent show from creators David McKenzie and David Martin, The Big Stage is hosted by Elizabeth Stanton and James Maslow. The series shines a spotlight on 44 diverse, experienced performers, including singers, jugglers, ventriloquists, quick-change artists, stand up comics, acrobats, aerial dancers, animal acts and more, as they show what they’ve got to both a live studio audience and home viewers.

The first season of The Big Stage is averaging a 0.11 rating in the 18-49 demographic and 547,000 viewers. Learn how The Big Stage stacks up against the other CW TV shows.

Will The CW cancel or renew The Big Stage for season two? The ratings are quite low but that’s nothing new for summer shows on The CW. My gut tells me that it won’t be renewed. For now, I’ll keep an eye on the ratings and update this page as the season progresses. Subscribe for free alerts on The Big Stage cancellation or renewal news.

How are your shows doing in the ratings? Check the current rankings:
A&E | ABC | AMC | Bravo | CBS | CMT | The CW | FOX | Freeform | FX | FXX
Hallmark | HBO | History | MTV | NBC | OWN | Showtime | Starz | Syfy | TBS
TNT | TV Land | USA Network | WGN America
What do you think? Do you hope The Big Stage TV show will be renewed for a second season? How would you feel if The CW cancelled this TV series, instead?