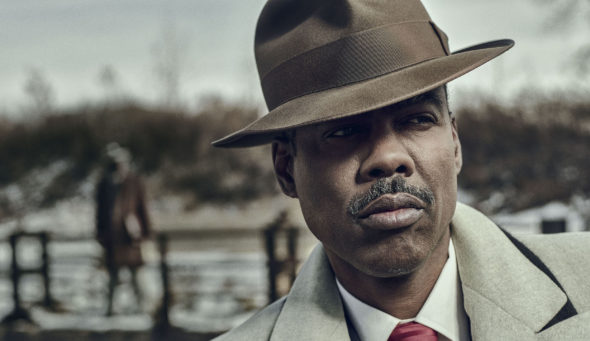 The wait is nearly over. FX has announced that the long-awaited fourth season of the Fargo anthology series will debut with a pair of episodes on Sunday, September 27th. Both installments have been directed by series creator Noah Hawley.

Season four, which stars Chris Rock, was originally supposed to debut on April 19th. The launch was delayed because production on the final episodes was shut down over the COVID-19 pandemic. Production on the remaining episodes is now expected to resume later this month. Season four will have 11 installments.

Here’s some additional information about Fargo from FX:

All New Episodes Air Sundays at 10 p.m. ET/PT on FX and Are Available for Streaming the Next Day on FX on Hulu

LOS ANGELES, August 10, 2020 – FX has set the premiere date for the highly-anticipated fourth installment of Fargo, the Emmy(R), Golden Globe(R), AFI, Peabody and TCA Award-winning limited series created by Noah Hawley. Starring Chris Rock, the next chapter will premiere with two episodes directed by Hawley on Sunday, September 27 at 10 p.m. ET/PT on FX, and the next day on FX on Hulu. The 11-episode installment will feature a new episode each subsequent week.

In 1950 Kansas City, two criminal syndicates fighting for a piece of the American dream have struck an uneasy peace. Together, they control an alternate economy of exploitation, graft and drugs. To cement their truce, Loy Cannon (Chris Rock), the head of the African American crime family, trades his youngest son Satchel (Rodney Jones), to his enemy Donatello Fadda (Tommaso Ragno), the head of the Italian mafia. In return, Donatello surrenders his youngest son Zero (Jameson Braccioforte) to Loy.

When Donatello dies in the hospital following a routine surgery, the tenuous truce is threatened. Josto Fadda (Jason Schwartzman) takes up his father’s mantle, but his efforts to stabilize the organization are undermined by his brother, Gaetano (Salvatore Esposito), who has joined the family in Kansas City after building a reputation for ruthlessness in Italy. The other Fadda men – including Ebal Violante (Francesco Acquaroli), Constant Calamita (Gaetano Bruno) and Antoon Dumini (Sean Fortunato) – must decide where their loyalties lie. Amongst the turmoil, Patrick “Rabbi” Milligan (Ben Whishaw), a man who once betrayed his own family to serve the Italians, watches carefully to ensure his survival.

Intertwined with this tale of immigration, assimilation and power, are the stories of Ethelrida Pearl Smutny (E’myri Crutchfield), the precocious 16-year-old daughter of Thurman (Andrew Bird) and Dibrell Smutny (Anji White), an interracial couple who own their own mortuary; U.S. Marshal Dick “Deafy” Wickware (Timothy Olyphant), a Mormon lawman; Detective Odis Weff (Jack Huston), the Kansas City cop known for his compulsive tics; and Oraetta Mayflower (Jessie Buckley), a nurse who cannot abide others’ suffering.

Peabody, Golden Globe and Emmy Award-winning Executive Producer, Noah Hawley (creator/writer/director), and his production company 26 Keys, lead the creative team of the latest all-new installment of the award-winning, true crime story. Warren Littlefield (The Handmaid’s Tale, The Old Man), and his production company The Littlefield Company, also serves as Executive Producer along with Joel & Ethan Coen. Fargo is produced by MGM Television and FX Productions, with MGM Television serving as the lead studio and international distributor.

Production on the fourth installment of Fargo, which was originally scheduled to premiere in the Spring, was postponed due to the Coronavirus pandemic and is scheduled to resume later this month.

ABOUT FX
FX is the flagship general entertainment basic cable channel of FX Networks. Launched in June of 1994, FX is carried in 85 million homes. The diverse schedule features a growing roster of critically-acclaimed and award-winning hit drama series including Snowfall, Pose, Mayans M.C., Taboo and the upcoming Redeemer; the critically-acclaimed limited series American Horror Story, Fargo, American Crime Story, FEUD, Fosse/Verdon and the upcoming Shōgun, and Great Expectations; acclaimed hit comedy series including Atlanta, Better Things, What We Do in the Shadows and Breeders; the half-hour series Mr Inbetween and the Untitled B.J. Novak Project; a slate of docuseries and documentary features, including The Most Dangerous Animal of All and AKA Jane Roe; and the FX Original Movie A Christmas Carol. FX is the former home of the critically-acclaimed and award-winning hit drama series The Shield, Nip/Tuck, Rescue Me, Damages, Sons of Anarchy, Justified and The Americans. The network’s library of acquired box-office hit movies is unmatched by any ad-supported television network.

What do you think? Are you looking forward to Fargo’s long-awaited return on FX?

Gilmore girls was a yak fest. Not my cup of tea.

Thankfully, not another show designated “FX on Hulu”.
Thanks for putting a FX show actually on FX channel.

IDK, series has been going downhill since second season