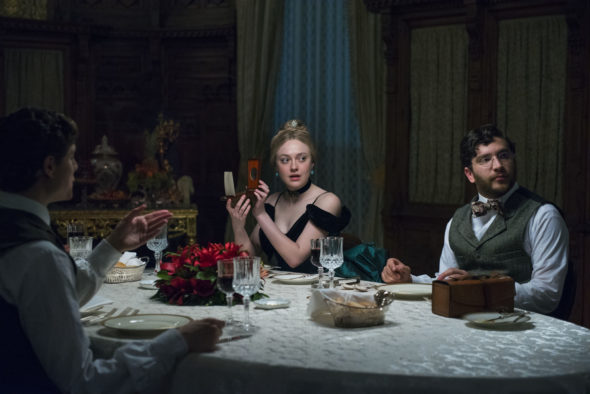 What do you think of Laszlo Kreizler’s methods in the first season of The Alienist TV show on TNT? As we all know, the Nielsen ratings typically play a big role in determining whether a TV show like the TV show The Alienist is cancelled or renewed for season two. Unfortunately, most of us do not live in Nielsen households. Because many viewers feel frustration when their viewing habits and opinions aren’t considered, we’d like to offer you the chance to rate all of The Alienist season one episodes here.

What do you think? Which season one episodes of The Alienist TV series do you rate as wonderful, terrible, or somewhere between? Should TNT cancel or renew The Alienist for a second season? Don’t forget to vote, and share your thoughts, below.

*6/13/18 update: Cast members have confirmed that the series ended with one season, though they’d be open for a second season. Details here.

*5/21/20 update: TNT has changed the title of the sequel series to The Alienist: The Angel of Darkness and is treating it like a second season.

I love the show. It is A mystery full of Excitement and love it is a cast of characters that I love. Also it is a period piece!

I love this show! The Alienist

Justin Pickford cancelling the (sequel) second instalment of The Alienist would be taking the best T.V. Making off the air!! Please Don’t!! It is so multi layered with the characters struggles as much as the cases and with the awesome acting and directing with the brilliant twisting music and photography will make this a “Cult Classic” if done well

Plz don’t cancel
Don’t know y it would be cancelled anyway
One of the better captivating shows out there !!

I love this show and will be really happy if it comes back with another season. One of the best show’s on TV.

Please do not cancel this show I really enjoyed the cast and the old school mystery of this story.. not anything like it on t.v..

Please do not cancel such a great well cast, intriguing show. Exceptional story lines to be had, go forth and Write…