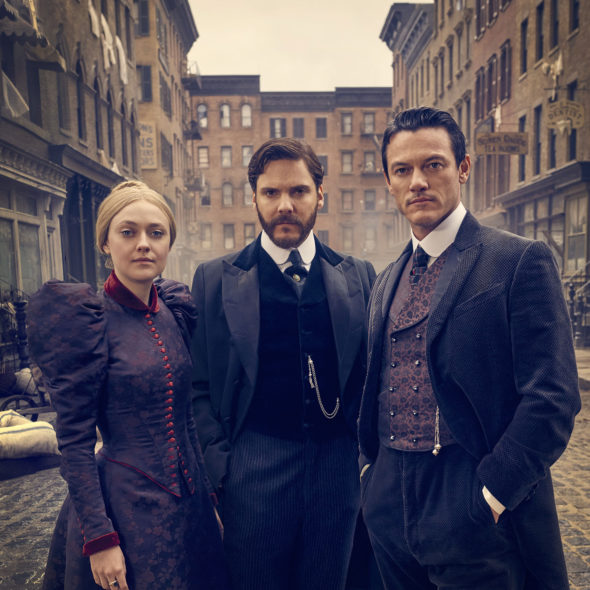 TV show description:
Based on the Caleb Carr novel, The Alienist TV show is a period mystery drama, set in New City during the Gilded Age. The series centers on Laszlo Kreizler (Brühl), an alienist, i.e. a criminal psychologist.

In 1896, a ritualistic serial killer is targeting boys. When a young, male prostitute is found slain on the unfinished Williamsburg Bridge, Police Commissioner Theodore Roosevelt (Geraghty) hires his old Harvard chums Kreizler and John Moore (Evans), as part of his secret investigation into the murders.

As an alienist, Dr. Laszlo Kreizler studies mentally ill people who commit deviant acts and feel “alienated” not only from others but from their very selves. His Kreizler Institute provides respite for children determined to be “damaged.”

Thanks to his unconventional views, and the fact that his profession is held in some disdain, Kreizler is not always well received. Dogged in his work, to the point of obsession, he keenly wants to get to the root of the problems of the human mind. He is always in search of an answer to the question: what makes someone a serial killer?

Not nearly as industrious as he is good looking, John Moore still mourns the death of his brother and remains depressed about a broken engagement. He works as an illustrator for the New York Times‘ society pages but otherwise spends his time numbing his pain with hookers and booze.

Kreizler elicits John’s help on the case, in the hopes that it will distract his friend from his self-destructive pastimes. Fortunately, John’s winning way with people helps buff out some of Laszlo’s rougher edges.

As the first woman hired by the NYPD, Sara Howard (Fanning) serves as Commissioner Roosevelt’s secretary but has set her sights on becoming the force’s first female detective. An only child who was the apple of her father’s eye, Sara knows she is as capable as the men around her. She serves as a liaison between the commissioner and Kreizler’s team and is fascinated by their big case.

Although he’s nearly as ambitious as he is intelligent, Teddy Roosevelt is a man of principle and is committed to reforming the corrupt police department. Since he lost his first wife and his mother on the very same day, Roosevelt is no stranger to tragedy and makes a point to be grateful for the good things, including his children and his second wife. Furious that the immigrant children in his city are being killed, he is committed to finding and stopping their murderer.

Fraternal twin brothers, detectives Sergeant Marcus (Smith) and Sergeant Lucius Isaacson are the force’s outcasts, in part because they’re of the Jewish faith, and in part because they favor a scientific approach to police work. They too are drafted onto the investigative team.

As his longest-serving employee, Cyrus Montrose works as Kreizler’s carriage driver. Thanks to his imposing size, he’s also something of a bodyguard. A former bordello pianist, this African-American man shares his passion for music with his boss, who once saved him from prison or life in a psychiatric institution.

Kreizler saved Stevie Taggart (Lintz) from a life on the streets. The boy now works as the doctor’s driver and houseboy and understands this is his second chance at a better life. Like Cyrus, Stevie becomes a part of the investigation.

Kreizler tries to keep his housekeeper, Mary Palmer (Kilcher), far from the case. As a former abuse victim whom he rescued from an asylum, Laszlo fears she is too vulnerable. He also has feelings for her.

At the commissioner’s request, this team works outside of the law, in order to avoid having their case tainted or thwarted by the corrupt NYPD, in hopes of stopping a killer. Will they succeed? Stay tuned.

What do you think? Do you like The Alienist TV series? Should this TV show be cancelled or renewed for another season on TNT?

Please bring it back. It was the best series of its type so far.

Would love to see another season. Please give it another chance.

Love the Alienist, please renew this superb show for a third season and more.

I enjoyed the aliens and I think it should be renewed. This was well put together. The cast was fantastic. Please renew it!

There should at least be two or three more seasons all with the same cast members. This is an exceptionally good series with perfect casting.

They should continue this show with the same cast and new cases. The first two seasons were outstanding and the time period was fantastic.

I totally agree. Both my husband and I love the show.