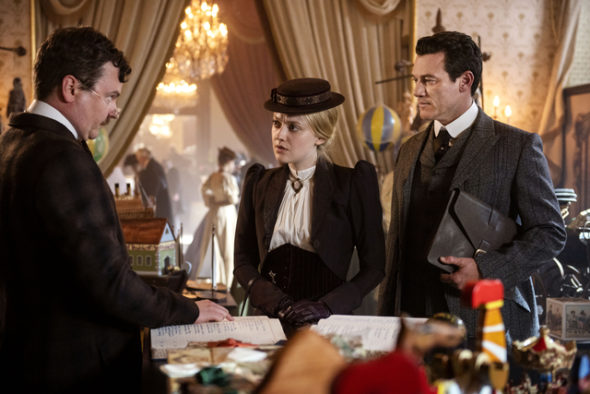 Can lightning strike twice? Has The Alienist TV show been cancelled or renewed for a third season on TNT? The television vulture is watching all the latest cancellation and renewal news, so this page is the place to track the status of The Alienist, season three. Bookmark it, or subscribe for the latest updates. Remember, the television vulture is watching your shows. Are you?

The second season of The Alienist (aka Angel of Darkness) averaged a 0.20 rating in the 18-49 demographic and 1.04 million viewers. Compared to season one, that’s down by 52% in the demo and down by 41% in viewership. Find out how The Alienist stacks up against other TNT TV shows.

Will TNT cancel or renew The Alienist for season three? Angel of Darkness is based on the sequel novel by Caleb Carr. A third book has been published and a fourth, The Alienist at Armageddon, is in the works. So a third season could be based on one of those or, the producers could make an original story. TNT aired two episodes a week and season two’s ratings were quite low so, there’s a good chance there won’t be a third season anyway. I’ll update this page with breaking developments. Subscribe for free alerts on The Alienist cancellation or renewal news.

What do you think? Do you hope The Alienist TV show will be renewed for a third season? How would you feel if TNT cancelled this TV series, instead?