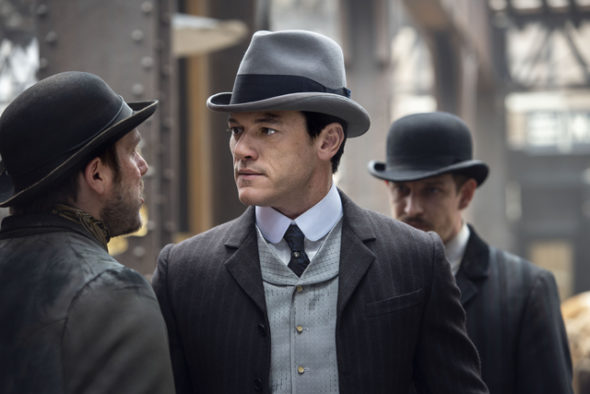 The first season of The Alienist was a success in the ratings for TNT. A sequel series (Angel of Darkness, now designated as “season two”) was ordered but it’s now been two and a half years between seasons. Will viewers still be interested in these characters? Will The Alienist be cancelled or renewed for season three? Stay tuned.

A period drama based on the books of Caleb Carr, season two of The Alienist stars Daniel Brühl, Luke Evans, Dakota Fanning, Douglas Smith, Matthew Shear, Robert Ray Wisdom, Ted Levine, Melanie Field, and Rosy McEwen. The second season, aka Angel of Darkness, takes place in New York City in 1897 where Sara Howard (Fanning) has opened a pioneering private detective agency. She reunites with formidable alienist Dr. Laszlo Kreizler (Brühl) and New York Times journalist John Moore (Evans) to find the kidnapped infant daughter of a Spanish dignitary. Their investigation leads them into a sinister path of corruption and deceit, towards a dangerous and elusive killer.

For comparisons: Season one of The Alienist on TNT averaged a 0.41 rating in the 18-49 demographic and 1.77 million viewers.

What do you think? Do you like The Alienist TV series on TNT? Should it be cancelled or renewed for a third season?