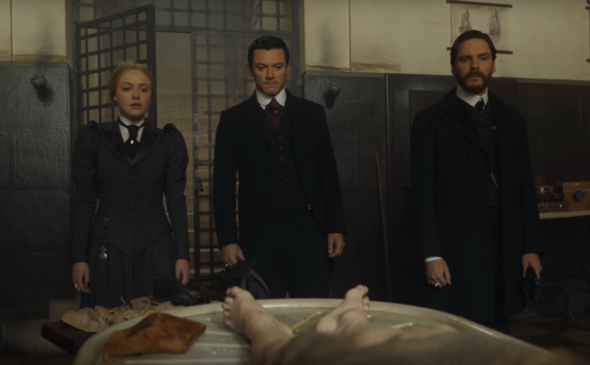 “I must follow this wherever it goes.” TNT has just released a new trailer and the premiere date for their upcoming TV show The Alienist.

Based on the book by Caleb Carr, the historical drama “follows the hunt for a serial killer responsible for the gruesome murders of boy prostitutes.” The cast includes Daniel Bruhl, Luke Evans, Dakota Fanning, and Brian Geraghty.

Turner’s TNT will take viewers into the darkest corners of New York City during the Gilded Age with the eagerly anticipated series The Alienist based on the Anthony Award-winning international bestseller by Caleb Carr. Set in 1896 amidst a backdrop of vast wealth, extreme poverty and technological innovation, this psychological thriller stars Daniel Brühl (Rush), Luke Evans (The Girl on The Train), Dakota Fanning (American Pastoral) and Brian Geraghty (The Hurt Locker). The Alienist is slated to premiere on Monday, Jan. 22 at 9 p.m. ET/PT across TNT platforms.

The Alienist also stars Douglas Smith (Miss Sloane) and Matthew Shear (Mistress America) as Marcus and Lucius Isaacson, twin brothers who help unravel the disturbing mystery; Matt Lintz (Pixels) as Stevie, a tough, young boy employed by Dr. Kreizler as a driver and errand boy; Robert Ray Wisdom (The Wire) as Cyrus, Kreizler’s valet, a man with a dark past who has been reformed by Kreizler; and Q’orianka Kilcher (The New World) as Mary, Kreizler’s mute maid with whom he shares a special unspoken connection.

What do you think? Have you read The Alienist? Will you watch the TNT series?