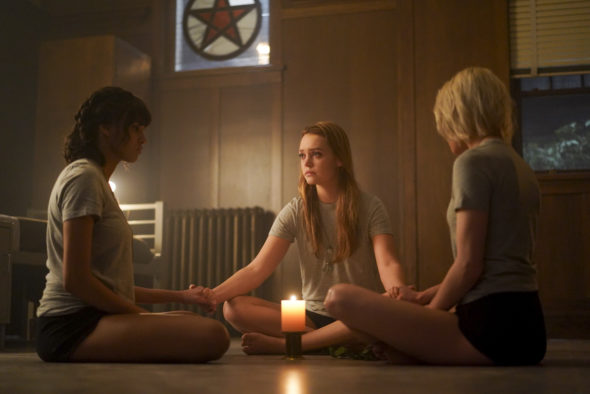 Can these ladies attract some ratings magic? Has the Motherland: Fort Salem TV show been cancelled or renewed for a second season on Freeform? The television vulture is watching all the latest cancellation and renewal news, so this page is the place to track the status of Motherland: Fort Salem, season two. Bookmark it, or subscribe for the latest updates. Remember, the television vulture is watching your shows. Are you?

Airing on the Freeform cable channel, the Motherland: Fort Salem TV show stars Taylor Hickson, Jessica Sutton, Ashley Nicole Williams, Amalia Holm, and Demetria McKinney with Lyne Renee, Kai Bradbury, and Sarah Yarkin in recurring roles. It is set in an alternate version of present-day America. In this reality, witches ended their persecution 300 years ago by cutting a deal with the United States government to fight for their country. The story follows three young women from basic training in combat magic into terrifying and thrilling early deployment. In this world, the traditional roles of gender and power are flipped with women on the front lines, the fight looming and terrorist threats that are strikingly familiar to our world, but with supernatural tactics and weapons.

Will Freeform cancel or renew Motherland: Fort Salem for season two? This show seems tailor-made for the channel’s target audience and Freeform has very few existing drama series right now. For the time being, I think it will be renewed. I’ll update this page with breaking developments. Subscribe for free alerts on Motherland: Fort Salem cancellation or renewal news.

5/19/20 update: Motherland: Fort Salem has been renewed for a second season on Freeform.

What do you think? Are you glad that the Motherland: Fort Salem TV show has been renewed for a second season? How would you feel if Freeform had cancelled this TV series, instead?

Great to see ( I just read on line) Motherland Ft Salem has been renewed….Great show –looking forward to viewing…….

PLEASE RENEW!! Very few shows my wife and I watch together but this is one of them!!

100% the show has to be renewed for a second season. Add more episodes too!! Ten is not enough!! Hands down the best show of 2020. Please renew!!

Easily the best show to have come out of any company in a long time! The plot, the characters, the representation is all amazing! It deserves a second season and I know the people want it.

This show has so much potential. The idea is a great one. Whoever has decided to turn it into an angsty teenage drama should be fired. Enough with the whiney girl drama.

CANCEL THIS SHOW! Too much sex and not enough on the plot. Boring.

Please dont cancel this show this show has got me through this crazy pandemic. I haven’t loved a show like this in long time, and I think it has the potential to go far.

An evolving story that is actually good…wow ..great writing have not
experienced that in a long time and good acting…makes me forget they are acting, even better…good show…

I was hooked on this show the moment I started watching it. It’s nice to see a new perspective on things, and there’s been a lot of witch-like shows and fantasy, alternate reality, etc. but this one has a unique way of showing all of it. I’m also happy to see the rep, whether that be of race, sexuality, gender, etc. it’s just nice to see. This is definitely a 2020 show, and it definitely deserves a renewal. I’ll be absolutely devastated if it’s not renewed, and I know a lot of people agree with me. Also, love the cast.… Read more »

Love the show, love the characters; was slow to develop; however; I’ve become a fan; and sincerely hope it’s picked up for another season. The storyline is fresh; and the characters developed extremely well. Keep this show on air.

I love the premise and direction that this show is going in, the modern look at a story that’s been told before, but not in this way. Critics are lazy and don’t represent the viewpoint of fans, renew? Duh…Alluring, mysterious, love, drama, emotional turmoil in all the right ways, with a great feminist movement undertone. It’s a must watch for lovers of any Witch based lore and fantasy!

I was a little slow picking up on the “alternate reality” aspect of the show. But I really enjoy it now and I am looking forward to another season.