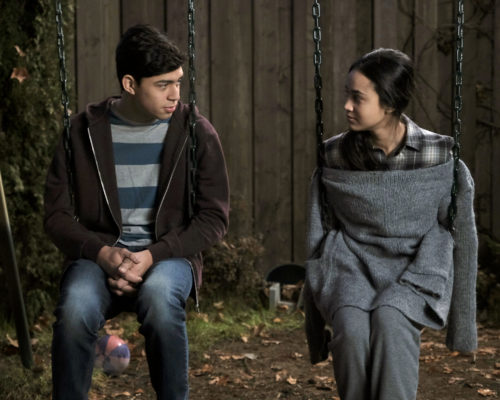 Is there room at the table for another reboot? Has the Party of Five TV show been cancelled or renewed for a second season on Freeform? The television vulture is watching all the latest cancellation and renewal news, so this page is the place to track the status of Party of Five, season two. Bookmark it, or subscribe for the latest updates. Remember, the television vulture is watching your shows. Are you?

The first season of Party of Five averages a 0.11 rating in the 18-49 demographic and 252,000 viewers. Find out how Party of Five stacks up against other Freeform TV shows.

Will Freeform cancel or renew Party of Five for season two? The ratings got off to a positive start but have dropped quite a bit. I thought it would be renewed but am now having doubts. I’ll update this page with breaking developments. Subscribe for free alerts on Party of Five cancellation or renewal news.

What do you think? Were you hoping the Party of Five TV show would be renewed for a second season? How do you feel that Freeform cancelled this TV series, instead?

Bring it back. The show took off in the middle of a pandemic. Unfair to see it go as viewers were forced to adjust to a new normal. It was addressing great content as it gave viewers some insight to Hispanic-American culture. I think it should be picked up. Come on this is was is called real life situations. Renew it.

Bring party of five back pls

Such a. Good show. Please bring it back

Please renew. The kids were so good and story was good. And I loved the original series and got hooked on this new version.

Please bring Party of Five back. I could see this show really going somewhere. It is a great story line. This show hasn’t had a chance with just one season.

I absolutely love this story and the truth that it tells. I truly hope that FreeForm gives it one more chance. It’s a powerful story and has room to go somewhere.

I love party of five. Acting is good and the story line is very relevant and moving. Please don’t cancel it.

I love the show, Good Trouble.Thank you for making it possible to watch & enjoy!

My favorite show, even more than This Is Us, which is a close second. All the acting good and Emilio really improves as his character.