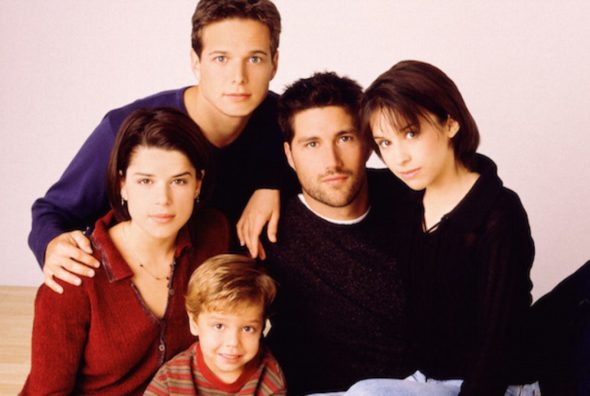 Amy Lippman and Chris Keyser, the creators of the Party of Five TV show from the ’90s, are bringing the series back to television with a new twist. In the original FOX series (pictured above), the five Salinger siblings become orphans when their parents are killed in an accident caused by a drunk driver.

In the new version, which will air on Freeform, the five Acosta kids must learn to make it on their own when their parents are deported to Mexico. The series stars Brandon Larracuente, Emily Tosta, Niko Guardado, and Elle Paris Legaspi.

The cable channel hasn’t announced a premiere date yet. We do know that there will be at least 10 episodes in the first season of the new Party of Five.

In advance of the Television Critics Association Winter Press Tour session tomorrow, Freeform announces the pickup to series of the reboot of fan-favorite “Party of Five” from the original creators, Amy Lippman and Chris Keyser. From Sony Pictures Television, the one-hour drama will follow the five Acosta children (fka Buendia) as they navigate daily life struggles to survive as a family unit after their parents are suddenly deported to Mexico. The series stars Brandon Larracuente as Emilio, Emily Tosta as Lucia, Niko Guardado as Beto and Elle Paris Legaspi as Valentina. The pilot was co-written by Lippman, Keyser and newcomer Michal Zebede.

“’Party of Five’ embodies the heart and soul of what it means to be a family in the most trying of times. We’re so lucky that Freeform gets to be the home for this reimagined story, as we continue to represent the resilience of young adults and the importance of fighting for your voice in times of doubt,” said Tom Ascheim, president, Freeform. “We are thrilled to be able to share the groundbreaking storytelling from Amy and Chris with a new audience, and are excited for our viewers to discover the beauty of this series.”

“We couldn’t be more excited to bring ‘Party of Five’ to another generation of fans. Amy, Chris and Michal’s distinct voice makes this series incredibly relatable and authentic. We are truly proud to be part of this journey,” said Jeff Frost, president, Sony Pictures Television and co-presidents Chris Parnell and Jason Clodfelter. “Party of Five” is created by Chris Keyser and Amy Lippman, who also serve as executive producers and writers. Rodrigo Garcia also serves as executive producer and directed the pilot. Michal Zebede serves as co-executive producer and writer.

About Freeform
Part of Disney|ABC Television, Freeform connects to audiences and goes beyond entertainment with bold, original programming and immersive social engagement. As Disney’s young adult television and streaming network, it delivers a unique mix of quality original and acquired series, plus fan-favorite movies and the holiday events “31 Nights of Halloween,” “Kick Off to Christmas” and “25 Days of Christmas.” The Freeform app is a service that allows viewers with participating TV subscription services access to 24/7 live viewing of the network, as well as continued on-demand access via a wide array of devices.

What do you think? Do you remember the original Party of Five TV show? Do you plan to check out the new version on Freeform?

Don’t think so, this PC is getting out of hand.