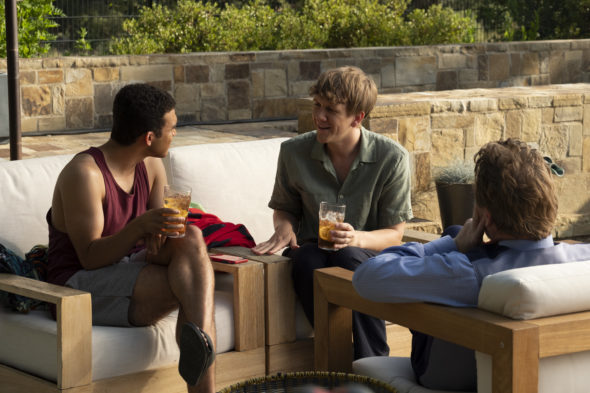 Can Nicholas handle his new role? Has the Everything’s Gonna Be Okay TV show been cancelled or renewed for a second season on Freeform? The television vulture is watching all the latest cancellation and renewal news, so this page is the place to track the status of Everything’s Gonna Be Okay, season two. Bookmark it, or subscribe for the latest updates. Remember, the television vulture is watching your shows. Are you?

Airing on the Freeform cable channel, the Everything’s Gonna Be Okay TV show stars Josh Thomas, Kayla Cromer, Maeve Press, and Adam Faison. The series follows the ups and downs of Nicholas (Thomas), a neurotic twenty-something. He’s home visiting his father and his teenage half-sisters — angry Genevieve (Press), who’s trying to find her place in the world, and Matilda (Cromer), a bright and outgoing high school senior who’s on the autism spectrum. Nicholas’ trip is extended due to his father’s untimely death and the siblings are left to cope with not only a devastating loss, but also the realization that misfit Nicholas will have to rise to the challenge, move in, and hold the family together. While all of this is going on, the new head of the household meets Alex (Faison) and they make a romantic connection.

5/19/20 update: Everything’s Gonna Be Okay has been renewed for a second season on Freeform.

What do you think? Are you glad that the Everything’s Gonna Be Okay TV show has been renewed for a second season? How would you feel if Freeform had cancelled this TV series, instead?

Would anyone be shocked if they cancel this show? They are the network that cancels everything. Nobody is ever safe.

I absolutely love this show I watched it every Thursday.. I would love for them to do a second season and more.. the best show on television right now

It’s honestly one of the best shows on right now. I loved every second of it. Here’s to hoping it gets picked up for a second season. If not, then congratulations to the cast and the production team for putting together a memorable season.

I love the show Everything’s Gonna Be Okay! Matilda is my favorite character!

I absolutely love this show and really hope FreeForm brings it back for a season 2 and more!