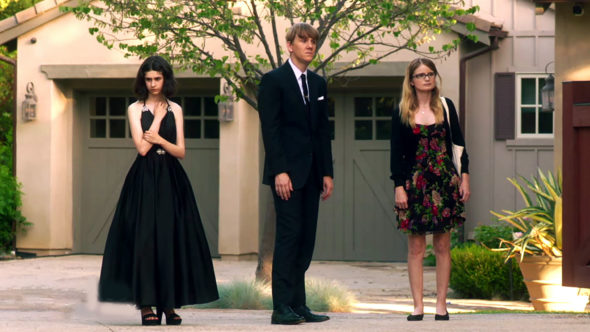 It looks like everything truly is gonna be okay for Josh Thomas’ series. Freeform just announced they’ve renewed the Everything’s Gonna Be Okay TV show for a second season for a 2021 return.

The Everything’s Gonna Be Okay comedy series follows the ups and downs of Nicholas (Thomas), a neurotic twenty-something who has to hold his family together after their father’s untimely death. The cast also includes Kayla Cromer, Maeve Press, and Adam Faison.

The first season of Everything’s Gonna Be Okay averaged a 0.06 rating in the 18-49 demographic and 175,000 viewers. It is one of Freeform‘s lowest-rated series in the traditional ratings but the channel has put more emphasis on delayed viewership in recent years.

Of the renewal, creator, executive producer, and star Thomas said, “This is great news, not just because it means I have a group of writers that have to hang out on my screen with me all day and I don’t have to be alone anymore getting weird but because I love this show and I love these characters and I love our cast and crew and making another season is just going to be so nice.”

What do you think? Have you seen Everything’s Gonna Be Okay? Will you be watching season two on Freeform?

I ABSOLUTELY LOVE THIS SHOW!!!!! It’s so much fun to watch! I have an autistic daughter who is exactly like the character Matilda. It’s so light and fun. Please don’t cancel!!! I relate to this show and need to have these characters in my life!!

Excellent show. It is the fastest…the end of each episode is there before I’m ready for it to end. Nicholas is wonderful and so kind…love his voice when it squeaks! The cast members are ALL wonderful….great acting. Very interesting story lines….nothing like it on TV. I laugh a lot! Thanks so much to Freeform for renewing, hoping to build on it’s audience.

I was one of the 175k watching and loved every minute. I am so excited for season two.

I love this show, and every individual Character on it. I have great hopes that it will be renewed, and that the Writers might use the opportunity to sneak in some real life Coping Skills and Mentally Healthy Behavior & Human Kindness for dealing with each Characters’ Natural Challenges, unexpected Issues, and the callous cruelty of this (hopefully) post-Trump World. Thank you to the Writers, your brilliance shines! Thank you to the Actors, your skills are a joy for the Viewer, at a time when joy is most very needed. Looking so forward to Season 2!

Love this show. It is so original and the characters are all so interesting. Hope it gets a chance to build a audience in it’s 2nd season.

Loved this show so much!

Love love love this show!!!! It makes me laugh out loud