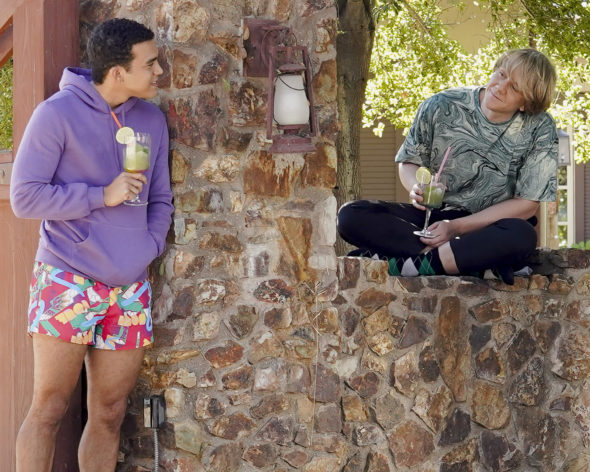 Can Josh rise to the challenge during a global crisis? Has the Everything’s Gonna Be Okay TV show been cancelled or renewed for a third season on Freeform? The television vulture is watching all the latest cancellation and renewal news, so this page is the place to track the status of Everything’s Gonna Be Okay, season three. Bookmark it, or subscribe for the latest updates. Remember, the television vulture is watching your shows. Are you?

Airing on the Freeform cable channel, the Everything’s Gonna Be Okay TV show stars Josh Thomas, Kayla Cromer, Maeve Press, and Adam Faison. The series follows the ups and downs of Nicholas (Thomas), a neurotic twenty-something. While home visiting his father and his teenage half-sisters — Genevieve (Press) and Matilda (Cromer) — Nicholas’ trip is extended due to his father’s untimely death. The siblings are left to cope with not only a devastating loss, but also the realization that misfit Nicholas will have to rise to the challenge, move in, and hold the family together. While all of this is going on, the new head of the household meets Alex (Faison) and they make a romantic connection. Navigating autism, budding sexuality, consent, parenthood, adolescence, family and grief, this imperfect family discovers the importance of finding happiness in the middle of really difficult moments, one awkward conversation at a time.

Will Freeform cancel or renew Everything’s Gonna Be Okay for season three? The ratings are low but my sense is that this show isn’t very expensive to produce and it fits well with Freeform’s other shows. I’m leaning toward a renewal but certainly wouldn’t be surprised by a cancellation either. I’ll update this page with breaking developments. Subscribe for free alerts on Everything’s Gonna Be Okay cancellation or renewal news.

8/19/2021 update:  Everything’s Gonna Be Okay has been cancelled on Freeform.

What do you think? Were you hoping that the Everything’s Gonna Be Okay TV show woud be renewed for a third season? Are you sorry that Freeform cancelled this TV series, instead?