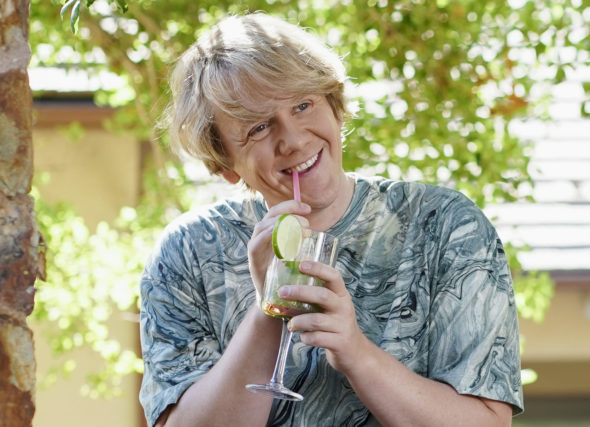 Nicholas and his unique family won’t return for the 2021-22 television season. Freeform has cancelled the Everything’s Gonna Be Okay comedy series so there’s not going to be a third season. The now de facto series finale aired in June.

The Everything’s Gonna Be Okay TV show stars Josh Thomas, Kayla Cromer, Maeve Press, and Adam Faison. The series follows the ups and downs of Nicholas (Thomas), a neurotic twenty-something. He’s home visiting his father and his teenage half-sisters, Genevieve (Press) and Matilda (Cromer). Nicholas’ trip is extended due to his father’s untimely death and the siblings are left to cope with not only a devastating loss, but also the realization that misfit Nicholas will have to rise to the challenge, move in, and hold the family together. While all of this is going on, the new head of the household meets Alex (Faison) and they make a romantic connection. Navigating autism, budding sexuality, consent, parenthood, adolescence, family and grief, this imperfect family discovers the importance of finding happiness in the middle of really difficult moments, one awkward conversation at a time.

The second season of Everything’s Gonna Be Okay averages a 0.05 rating in the 18-49 demographic and 111,000 viewers. Compared to season one, that’s down by 29% in the demo and down by 36% in viewership in the traditional live+same day ratings. It’s the lowest-rated show of Freeform’s current slate.

Thomas revealed that the series won’t be coming back via social media but noted that he is working on another project.

I'm working on a project at the moment (to be announced) and have a bunch of shows I'm getting my hustle on and will be out pitching. I'm pretty jazzed about them but will miss this show for sure. Thank you. xx

What do you think? Did you enjoy watching the Everything’s Gonna Be Okay TV series? Are you disappointed that there won’t be a third season on Freeform?

I Loved Everything Is Gonna Be OkayOkay
Wasn’t as funny last season as the first but still enjoyed.
Love the actors!

But crap like Growing-ish is yet another renewal. see why people no longer want to pay for programming.