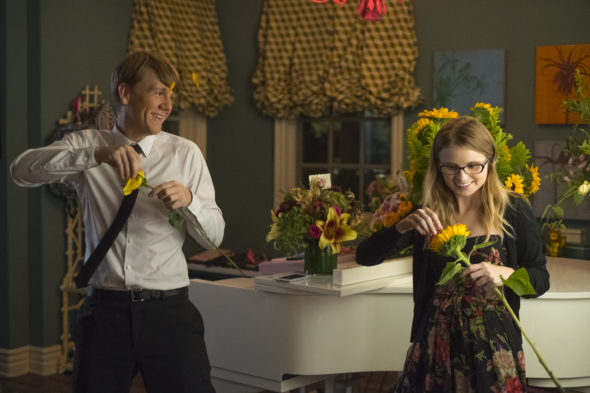 An actor, comedian, and writer from Australia, Josh Thomas is best known to U.S. viewers for the Please Like Me TV show, a comedy-drama that ran for six seasons. How will his Freeform show perform in the ratings? Will Everything’s Gonna Be Okay be cancelled or renewed for season two? Stay tuned. *Status update below.

A comedy series created by Josh Thomas, the Everything’s Gonna Be Okay TV show stars Josh Thomas, Kayla Cromer, Maeve Press, and Adam Faison. The series follows the ups and downs of Nicholas (Thomas), a neurotic twenty-something. He’s home visiting his father and his teenage half-sisters — angry Genevieve (Press), who’s trying to find her place in the world, and Matilda (Cromer), a bright and outgoing high school senior who’s on the autism spectrum. Nicholas’ trip is extended due to his father’s untimely death and the siblings are left to cope with not only a devastating loss, but also the realization that misfit Nicholas will have to rise to the challenge, move in, and hold the family together. While all of this is going on, the new head of the household meets Alex (Faison) and they make a romantic connection.

What do you think? Do you like the Everything’s Gonna Be Okay TV series on Freeform? Should it be cancelled or renewed for a second season?

*5/19/20 update: Everything’s Gonna Be Okay has been renewed for a second season on Freeform.

I adored this show. Marathoned it in a day, was utterly charmed by it. PLEASE tell me there’ll be a Season 2!

I love the show EVERYTHING’S GONNA BE OKAY: funny, sophisticated with current and classic human issues. Funny, which I really need in this sad time. I REALLY hope there will be a season 2. Great writing, great cast. I want to see the girls grow up! Josh Thomas superb writer and actor!

I loved this show – came abruptly to an end after just 10 episodes? so I started re-watching Season 1

Hoping Season 2 is not too far away … thank you

I came across this show entirely by accident. It is just lovely and so endearing. I heartily recommend it.