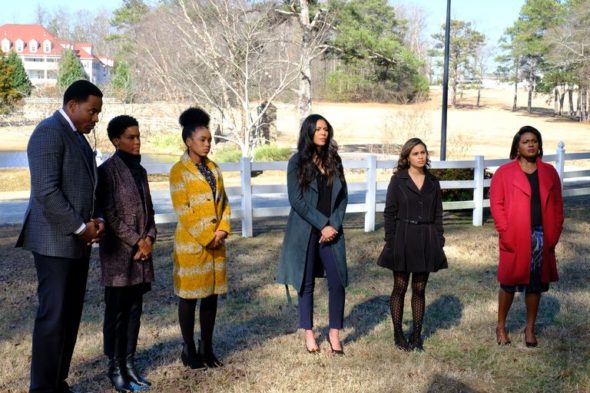 The end is near for the Greenleaf TV series but, the story may continue. OWN has announced that the fifth and finals season of Greenleaf will debut on Tuesday, June 23rd at 9:00 PM. The channel has also revealed that there’s a new spin-off series in the works.

Here’s the OWN announcement about season five and the spin-off, as well as teaser videos for both projects:

OWN: Oprah Winfrey Network is in development with Lionsgate on a spin-off of the network’s critically-acclaimed hit megachurch drama “Greenleaf” from award-winning creator and executive producer Craig Wright. The network revealed the development news with a spin-off teaser spot.

From the inception of “Greenleaf,” Wright and executive producer Oprah Winfrey envisioned that the story told by the Lionsgate and Harpo Films produced series would span five seasons, with Wright contemplating a spin-off. These plans accelerated when fans expressed their support for the show after its final season was announced, reaffirming its passionate fan base.

“Greenleaf” takes viewers into the unscrupulous world of the Greenleaf family and their sprawling Memphis megachurch, where scandalous secrets and lies are as numerous as the faithful. The series stars Merle Dandridge as Grace Greenleaf; Keith David as Bishop James Greenleaf; Lynn Whitfield as Lady Mae Greenleaf; Kim Hawthorne as Kerissa Greenleaf; Lamman Rucker as Jacob Greenleaf; and Deborah Joy Winans as Charity Greenleaf-Satterjee. “Greenleaf’s” fifth and final season will premiere on Tuesday, June 23 at 9 p.m. ET/PT.

“Greenleaf,” which originally premiered on OWN in June 2016, recently won the 2020 NAACP Image Award for “Outstanding Drama Series,” and series star Lynn Whitfield was named Outstanding Supporting Actress in a Drama Series for the second year in a row. The “Greenleaf” Soundtrack Volume Two was named Outstanding Gospel/Christian Album (Traditional or Contemporary) by the NAACP Image Awards in 2018. The series has also been recognized by the Alliance for Women in Media’s Gracie Allen Awards and by the Black Reel Awards for Television.

“Greenleaf” is produced for OWN by Lionsgate in association with Harpo Films and Pine City. Executive producers are Oprah Winfrey, Craig Wright, Clement Virgo, and Kriss Turner Towner.

What do you think? Do you like the Greenleaf TV series? Will you be watching season five? Would you tune in for a spin-off?

We’re just getting started. You cancelled toooooo soon. Bring the show back, or start on a spin off. Your fan base is too large for this to happen. You dismantled a successful show just when it was getting traction. Nothing on television demonstrated the human condition like Greenleaf. Reboot!!

OWN please reconsider. This show is just starting! The storyline is unrivaled as are the cast. There so are many unanswered questions and avenues this show could take! Give us just a couple more Greenleaf years

Please keep this show going. A lot of good points with things that has happened to real life people. I love this show

Please keep Greenleaf on the air. It is one of the best shows EVER! The show is so intriguing and with just enough scandal to keep us begging for more. I love love this show. Please don’t go!

Yes I would watch Greenleaf!! Great show. Keeps you on the edge if your seat till the next show. Lots of twists and unexpected turns. Please keep the show going on.

WHY are you canceling Greenleaf in the first place…?
The show is awesome and there are so many storyline yet to be addressed…just ask me…..born in a parsonage and I know what’s BEHIND THE PULPIT!!!!

Love Greenleaf, will check out the spin off also. Would watch both.

I DONT INDERSTAND WHY GREENLEAF CAN NOT CONTINUE. YOU HAVE SO MANY ANGLES TO PULL FROM. I DONT KNOW ABOUT THE SPINOFF AND CANT ANSWER THE QUESTION TO WHETHER I’LL WATCH SOMETHING I HAVE NO KNOWLEDGE ABOUT. GIVE ME A LEAD ABOUT THE SPONOFF SO I CAN MAKE A DECISION.

Wish they would not cancel Greenleaf. My wife and I have waited impatiently for months for the series to resume only to hear it will be the last season.

This is heartbreaking. I totally enjoyed every moment of this series. Extremely saddened that this will be the final season but can understand. I’m wondering who they will spin off of? So many gray characters but my guess is Pastor ******.