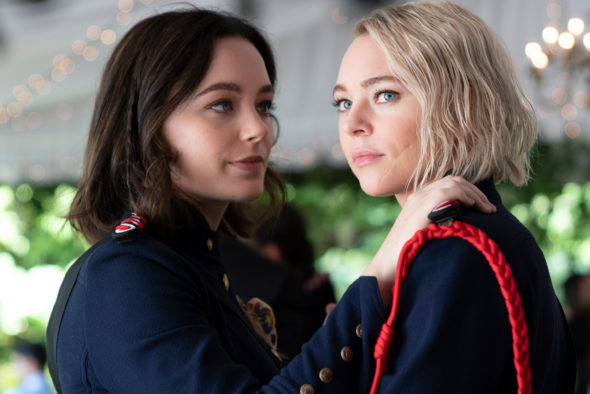 Freeform is returning to Motherland: Fort Salem. The network just announced that the TV series has been renewed the TV show for a second season. In addition, Lyne Renee (aka General Alder) has been upped to series regular for season two. There’s no word on when season two will air but, given the current pandemic-induced shutdown, a 2021 premiere seems likely.

The Motherland: Fort Salem drama series is set in an alternate version of present-day America. In this reality, witches ended their persecution 300 years ago by cutting a deal with the United States government to fight for their country. The story follows three young women from basic training in combat magic into terrifying and thrilling early deployment. The cast includes Taylor Hickson, Jessica Sutton, Ashley Nicole Williams, Amalia Holm, and Demetria McKinney with Renee, Kai Bradbury, and Sarah Yarkin in recurring roles.

“I could not be more grateful for the chance to keep exploring the world of ‘Motherland: Fort Salem,’” said executive producer and creator Eliot Laurence. “Freeform has been such a fabulous home for us through the development process, production, post, and marketing. I’m also blown away by the love we’ve gotten from our fans, whose excitement and passion played a massive part in this renewal. Thank you, witches!”

What do you think? Have you seen Motherland: Fort Salem? Will you watch season two on Freeform?

I can’t wait to see where the next season takes the characters I absolutely love the series.

I love this show and I hope to see another season

Yes when is season 2 coming?

Love this show… Hope season 2 comes back… It started off a wife tv night show then my husband grew to like watching it with me..
PLEASE BRING SHOW BACK!!!

So glad to hear Season two is coming…I love this show….Thanks, Freeform.

Love this show! I had to bingewatch the season because I only saw 2-3 episodes during their normal timeslot. It is so well written, and I love that the women are smart and complex. I do not fully understand the roles of the biddies or witchfather, but I cannot wait to learn more.

They need to hurry up and air season 2 I love this show it’s awesome! I hope they have many more seasons!

CANT WAIT FOR SEASON 2 I AM ALREADY A MAJOR

Will absolutely watch the second and beyond seasons and I am in the 70+ group. Cancelling this would be like getting rid of Captain Kirk after season number 1!!!!!

I love this series. So glad it’s renewed. Love the characters and realistic friendships.

Could not be happier. I’m sure all the fans of Motherland:Fort Salem are in for a very exciting Season 2. The cast is phenomenal.

“One of the top rated shows”… well, karma sucks! i already saw this network cancel shows with 1.2 mm average (Ravenswood)…