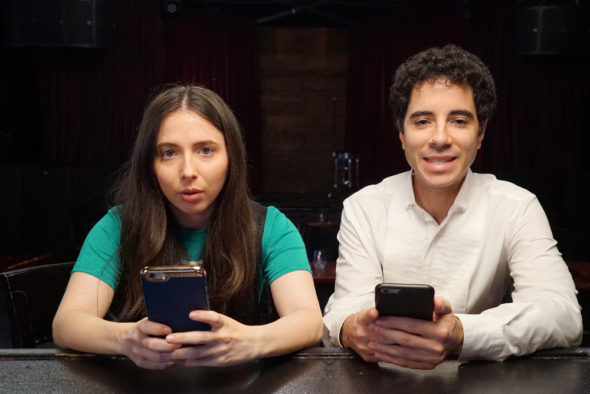 It’s finally happening. Freeform has announced its new Alone Together TV show will premiere on Wednesday, January 10, 2017 at 8:30pm ET/PT, following the new, Black-ish TV show spin-off, Grown-ish. In more good news for the millennial misfit sitcom, Alone Together has already been renewed for a second season.

A live-action comedy from stars Esther Povitsky and Benji Aflalo, who created the series with Eben Russell, Alone Together features two mis-matched friends trying to make it in L.A. Learn more from this Freeform press release.

Alone Together: Freeform Commits to ‘Alone Together,’ Greenlights Second Season Ahead of January 10 Series Premiere

FREEFORM COMMITS TO ‘ALONE TOGETHER,’
GREENLIGHTs SECOND SEASON AHEAD OF JANUARY 10 SERIES PREMIERE

Freeform, Disney’s young adult television and streaming network, today announced that its freshman comedy series, “Alone Together,” has been greenlit for a second season ahead of its series premiere. Slated to debut Jan. 10, 2018, at 8:30 p.m. EST, “Alone Together” stars comedians Esther Povitsky and Benji Aflalo and is executive produced by The Lonely Island trio Akiva Schaffer, Andy Samberg and Jorma Taccone.

“’Alone Together’ is easily the best show ever made,” said The Lonely Island’s Andy Samberg, Akiva Schaffer and Jorma Taccone. “If you don’t watch it, you’re a fool. There are 4 million shows on TV, but this is the only one worth watching.”

“Alone Together” stars stand-up comedians Povitsky (“Crazy Ex-Girlfriend” and named Variety’s “10 Comics to Watch in 2017”) and Aflalo (“Not Safe with Nikki Glaser”) as two overlooked millennial misfits from different backgrounds trying to make their way in the vain and status-obsessed culture of Los Angeles. These two only find salvation in their male/female strictly platonic friendship. Throughout the season Esther and Benji’s misadventures include shooting their own music video, standing in line for a Lip Kit Pop Up and even trying their hand at retirement life. Regardless of the escapade, you can be sure in their own warped way they will have each other’s backs while calling each other on their nonsense in a way that only best friends can.

“I’m so grateful to Freeform for this crazy opportunity,” said Povitsky. “Plus, you know the saying: ‘second season, second dog.’ I’ll see you guys at the animal shelter.”

“Season one was so fun,” said Aflalo. “If we did not get a season two, I was gonna dedicate my life to some sort of charity because I’m a really good person on the side.”

You can also become a fan of “Alone Together” on social media at:

What do you think? Are you a fan of The Lonely Island? Do you plan to check out Freeform’s Alone Together TV series? Let us know, below.